Genetic modification will always be controversial especially when it comes to traditional wine regions. Genetic engineering could change the viticultural landscape.
The history of plant breeding and genetic engineering took a surprising turn last month, when the French government authorized the introduction of new hybrid grape varieties into the country’s viticultural landscape.

Four varieties – Floréal, Vidoc, Voltis and Artaban – were developed by the French National Institute for Agronomic Research (INRA), who decided to play god with the intention of increasing the circulation of disease-resistant grapes in French vineyards.

Designed to be resistant to downy and powdery mildew, the news came as vignerons were bemoaning the scourge of downy mildew, which has been an unwelcome guest at chateaux across France during the 2018 growing season.

Yet over the last few decades, the very mention of the word « hybrid » has led to swift banishment from your host’s boudoir. Germany and California are forever playing with the genes of the vine, the endless quest for greater profit margins resulting from disease resistance and higher yields.

France, though, largely wanted nothing to do with the « rape » of Vitis Vinifera in the late 20th century, and their opposition to hybrids and crosses arguably played some role in slowing the development of the genetic manipulation of the vine. 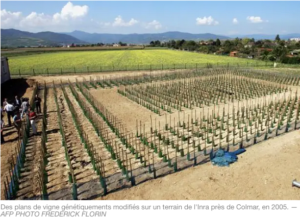 Many would argue they had simply learned from their past mistakes – fungus-resistant hybrids were developed in the 19th Century and by the 1960s they were being used in over 30 percent of French vineyards.

Indeed, hybrids such as Villard Noir and Seyval Blanc – the latter once an important part of the UK’s industry – were prolific in southern France, much loved because of their generous yields and resistance to downy mildew. Whether Baco Noir, Plantet and Chambourcin produced decent-quality wine is of course another question entirely, and by the 21st century they had been virtually eradicated from French vineyards.

But in a zeitgeist where climate change and the (perceived) excessive usage of chemicals in French vineyards are a constant sources of controversy, the hybrid debate has been reopened. Several leading winemakers have come out in support of the initiative, somewhat to my surprise. Others simply refused to comment.  « My reaction is simple: finally, not a moment too soon, » says winemaker Laurent Delaunay.  « Vine degeneration and vine diseases such as esca are causing, in certain regions, up to 20% of loss of harvest. Since the only cure we currently have against esca, sodium arsenite, was banned for obvious reasons, the industry has lacked a viable solution. New grape varieties including hybrids are one of the answers to these challenges and it’s a shame that, contrary to what happens in other countries like Switzerland, which is well ahead of schedule, everything in France takes so long. »

Once bitten, twice shy Delaunay.  France’s era of widespread hybrid plantation involved many crosses between the European Vitis Vinifera and American varieties of vine – good for the bank balance perhaps, but hardly up to the challenge of producing quality wine.  « This era doesn’t hold good memories for the French industry, » he admits.  « Some hybrids were dangerous for your health as they were producing high levels of methanol and also, secondly, because they were creating severe imbalances in the market.  However, new species of hybrids have been carefully selected and tested in order to avoid these downsides. »

Nevertheless, Delaunay concedes that he would consider planting these new hybrid varieties « only as an experiment, » citing the fact that consumers need time to get used to these new faces, should they become a permanent feature of the French landscape.

Currently, the AOC framework forbids the use of hybrids, so don’t expect to see Chambertin or Morgon derived from Villard Noir any time soon. When I put the question of hybrids to Louis Jadot, their response was instant and terse – « We won’t be using them. »

Alastair Rimmer, winemaker at Kleine Zalze (Stellenbosch, South Africa): « I am a bit on the fence about them. In certain instances disease resistance and drought resistance is of value but I think it is sometimes more to do with the rootstock than the grape variety… I personally worry it is just sometimes a case of something new for something new’s sake and not actually significantly better. » 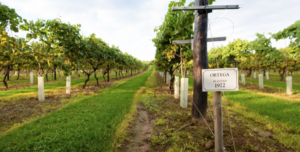 Resistance towards disease is one of the benefits genetic engineering can bring. © Biddenden Vineyards – Kent

And so the arguments rage on. There are many possible outcomes of French growers adopting these new hybrid varieties in significant numbers, but consensus is not one of them. The idea of Floréal or Vidoc becoming household names seems ludicrous today, and the wine community clearly needs a few vintages under its belt before judgment can be dispensed regarding their potential for quality winemaking.

Moreover, many of those in favor of the initiative simultaneously deny any interest in planting the grapes on their land, even to make Vin de France, hardly an exalted designation.

However, Delaunay and others are still convinced that this is the correct way forward for the industry, particularly in light of growing concerns about chemical usage in viticultural management. « A key challenge is to be able to produce grapes and make wines in a more environmentally friendly and organic way, as our consumers are asking us to do this, and to reduce the use of chemicals in the vineyards. Hybrids help facilitate this and so are the way of the future, » says he.

« The fact that the French are allowing the introduction of new hybrid varietals are a sign of more changes to come, » observes Wim Truter, chief winemaker at KWV (Ko-operatieve Wijnbouwers Vereniging in South Africa).

« I do however think that hybrids are only the start compared to the genetic research that is being done to tailor make a vine. It ends up as an ethical debate – plant a genetically engineered plant that needs no spays and has no negative impact on its surroundings but it is a GMO with the negative connotations in the consumer’s mind. »

I put this argument to Dr. Richard Smart, one of the world’s leading viticulturists and experts on diseases such as trunk disease. He’s rarely lost for words.

« The arrival of these new hybrids comes at an opportune time – a period where negative publicity over the usage of pesticides and herbicides in viticulture is rampant, » says Smart.

« To that end they represent a positive development, at least in terms of helping growers to meet consumer demand. But whether this demand is based on evidence is another matter – the hysteria over the use of chemicals has reached ludicrous levels, spurred on by the press, » he adds.

The inimitable Dr. Smart is no acolyte of organic and biodynamic viticulture either, citing the « fuss » over biodynamics as ‘ridiculous.’

« I wish journalists would stop talking-up organic and biodynamic wines, » fumes Smart. « There is no hard evidence that organic or biodynamic viticultural methods improve the quality of the wine, or the health of the vine. For a start, organic viticulture still allows the use of copper via the ‘Bordeaux Mixture’ (bouillie bordelaise) used to protect against mildew. I wonder what would happen if a critical mass of consumers realized that copper was used in producing their organic wine. Copper – hardly the most ‘natural’ of substances. »

He puts forward a convincing case, although it is clear that the interest from growers in biodynamic viticulture is unlikely to diminish anytime soon. Improvements in hybrid-crossing techniques, coupled with the aforementioned concerns over pest control and chemical usage, undoubtedly provide a fertile ground for these hybrids to flourish, if it can be proven that quality is not sacrificed in the process. Which, of course, remains the major bone of contention for every hybrid skeptic. « I am afraid that a lot of old varieties of grapes will be pulled up to make way for them, especially in southern France, » said winemaker and consultant Thomas Dormegnies. « These laboratory varieties are for industrial winemaking and aim to compete with cheap wines from Spain. They are preparing us for a generation of cut-price wines. »

The natural corollary of such an observation is George Santayana’s most famous aphorism: « Those who cannot remember the past are condemned to repeat it. » Is France about to repeat the mistakes of previous generations, or are growers poised to overturn outdated prejudice and embrace the future of sustainable vine growing?