Six Questions About Natural Wine You’re Too Embarrassed to Ask. 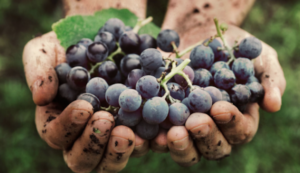 Natural wine is a global phenomenon, impossible to ignore (or define). Its momentum is undeniable: RAW wine, an independent natural wine fair, launched in New York and Los Angeles in 2017; by 2018, it was also in London, Berlin, and Montreal.

According to Google Trends, search volume for natural wine quintupled between June 2014 and June 2018. The category hit peak mainstream when Aldi, the budget-friendly supermarket, launched its very own natural line in August 2018.

But what exactly does “natural wine” mean? With little consensus and no official regulation, definitions are hard to come by. Besides, every wine is made from juiced fruits — aren’t they all natural?
Here are six of your trickiest questions about natural wine, answered.

The term “natural wine” currently has no legal definition. Any producer is free to label bottles and describe their wines as such.

Each has a slightly different interpretation of the term, but all philosophies revolve around sustainable, organic, or biodynamic farming. Most also highlight minimal intervention in the winery, which means winemakers don’t add or remove anything to the juice during vinification.

Natural winemakers aim to produce fermented grape juice that’s as close to nature as possible. (If this sounds vague and hard to quantify, that’s because it is.) They prioritize wines that display the character of the grapes and environment in which they were grown — two other decidedly subjective criteria. Hey, we never said this would be easy.

2.   What are other terms people use to talk about natural wine?

Many in the wine industry prefer the terms “minimum intervention,” “low intervention,” and “non-invasive” because they provide a more specific, technical description of the winemaking process.

Other, more ambiguous descriptors include “real,” “raw,” and “living” wine. These adjectives are evocative but not technical, and so we don’t recommend them.

3.   What’s the difference between natural wine and, well, regular wine?

Generally speaking, there’s a noticeable difference in the appearance, aromas, and flavors of natural wines versus “regular” wines. (The natural wine category is unregulated, though, and so it’s hard to make definitive comparisons.)

Cloudy looks and funky flavors are how many consumers think about and classify natural wines. Their cloudy appearances result from winemakers who don’t add fining agents or filter out impurities after fermentation. Meanwhile, “funky,” “sour,” and “barnyard” descriptors often attributed to the style come from the use of native yeasts and lack of preservatives.

4.   Is it the same as organic or biodynamic wine?

Organic and biodynamic farming are aspects of natural winemaking, both of which occur in the vineyard. Different entities oversee organic certification worldwide, and requirements vary country to country. Organic producers in the European Union, for example, can add sulfites to wine, as long each bottle’s total quantity doesn’t surpass 100 parts per million. But in the U.S., adding sulfites to organic wine is strictly forbidden. Some organic and biodynamic certification bodies also allow the use of inoculated yeasts for fermentation and the use of animal-based fining agents.

Those who describe a wine as “natural,” however, typically refer to those vineyard practices (e.g., how grapes are farmed) as well as everything that happens in the winery after the grapes have been picked. Natural winemakers will use naturally occurring yeasts for fermentation, avoid adding large quantities of sulfites (if any at all), and opt not to remove any impurities prior to bottling.

All wine contains sulfites. The chemical compound is a natural byproduct of fermentation. Some winemakers add sulfites to their wines, however, to keep them fresher for longer.

Those extra sulfites are a point of contention in the natural wine world. Some winemakers add tiny quantities (up to 30 milligrams per liter) to help keep their wine stable after bottling. Others, however, are adamantly opposed to adding them. In 2000, celebrated natural winemaker Henri Milan lost almost his entire vintage when bottles and vats of his no-sulfur wines started re-fermenting.

Natural wine producers exist in almost every winemaking region worldwide. France’s Loire Valley is the O. G. Winemakers there have been producing minimum-intervention wines since the 1970s, and the area continues to be a hub for fresh, funky, and sour bottlings. Outside the Loire, Beaujolais, Jura, and Savoie are other important French regions in the natural category.