DO WE ENJOY BEING WINE SNOBS? 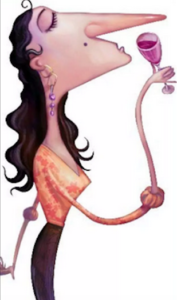 It never really seems to go away, does it?  France continues to debate whether or not wine is simply a form of alcohol or a cultural beverage.

Agnès Buzyn, the strident Minister of Health, recently said the molecule of alcohol in wine was the same as that in any other alcoholic beverage.

Most wine commentators and industry insiders tend to argue that wine is indeed a cultural product – if not outside of the remit of anti-alcohol legislation, then deserving of certain special character exemptions.  Wine has, of course, been around for centuries and in many parts of the (generally European) world it is woven into the historical, agricultural and social fabric of the regions it is produced and consumed in.  It is not, we might argue, simply a means to get wasted, more a cerebral and pleasurable accompaniment to our oldest ritual: eating.

But if we accept this – and, let’s face it, while we get Agnès Buzyn’s point, we agree that wine can give pleasure beyond getting a bit tipsy – then we should probably accept that wine is inextricably woven into the one thing many of our commentators try their best to distance wine from: snobbery.  In siding with Didier Guillaume, we are saying that our beverage is outside the remit of others, special, apart.  I’m not drinking alcohol as you know it, I’m having a glass of wine.

Is there anything more snobbish than this?  My wine – and remember, this is any wine – is special,  it’s cultural.  It’s not some pagan concoction of water and barley, or a boffin’s vapor tube over a bubbling bowl. No, we are apart; wine is holy.  It doesn’t matter if it’s Yellow Tail or Yquem, Turning Leaf or Troplong-Mondot, Apothic or a Pauillac.

Now, one can posit that this is not correct, that wine – like any alcoholic beverage – resembles little of the artisanal, cultural product it might have been when it is produced in the millions-of-bottles.  Beer, spirits, mead, and so on, are all, originally cultural products.  We can say that, actually, there is a greater distinction between the mass-produced and the work of the craftsman; the Heineken and the craft beer; the Jack Daniel’s and the Woodford Reserve; the PG Tips and the First Flush Darjeeling. 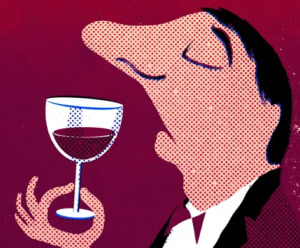 But let’s not.  Let’s agree with Didier Guillaume for a moment and say that all wine is indeed a cultural product and, by association, the most exalted of drinks.  Wine drinkers therefore are, if not actually snobs, then wannabe snobs.  Wine is the vehicle for and to our snobbery.  It might even be unconscious.  My father once told me how his uncle tried to point out that there was no such thing as a socialist.  « Sure, they all belong to the Labour party, » he said.

« But they all play the football pools [the equivalent of lotto], hoping to become individually rich. »  And maybe this is, subconsciously, what we do when we open a bottle of wine.  Maybe this is why there is still a screwcap debate: we’re actually all, deep down, a bit snobby about corks.  Maybe this is why rich people can’t just drink wine, they have to collect it or own very rare bottles (because everyone else engaged in wine is already snobbish enough)?  Maybe we secretly like our non-wine friends’ trepidation and raised eyebrows when we turn up with a bottle of Brouilly?  Is this actually us?

Perhaps those of us who have been constantly telling people that wine can be accessible and free of snobbery have been doing it all wrong.  Maybe neophites want the snobbery, the cultural heft of the product that no other drink can provide.  Is snobbery the unwritten rule of wine?  Wine people on social media have been having a bit of a giggle lately at a new release called JNSQ (Je Ne Sais Quoi – truly,  I don’t know either), a non-vintage Californian Rosé and Sauvignon Blanc in what looks like a repurposed perfume bottle.  It’s purportedly aimed at Millennials.

Just read the brand story: « There is a lovely French colloquialism used to describesomeone so unique and exceptional that no words exist to sufficiently capture her essence.  ‘She’s got a certain je ne sais quoi,’ one might say, in the hopes it explains that extraordinary ability someone has to rise above all the rest. »

How does that sound?  We might laugh at this, and at Jay-Z’s Ace of Spades, but we’re only laughing at ourselves – remember, this is a universally cultural product.  I mean, it used to be that if you were nouveau riche and wanted to get in on the « old money » circuit (the kind of people who don’t have to buy their own furniture), you took up polo.  You hob-nobbed with royalty and extended royalty and got invites to private views at galleries in Mayfair.  The equivalent now is turning up for dinner with a bottle of plonk.

A recent piece by Richard Hemming MW entitled, inter alia, Keeping faith with wine looked at the attempts to debunk the world of wine, including Malcolm Gluck’s line that it’s « a world that still deliberately surrounds itself in impenetrable, pretentious and often plain misleading wine-speak, churned out by snobby writers … who delight in the obscure and shadowy, the indistinct and imprecise. »  Hemming ties this into notions of faith, that wine’s inscrutability demands a certain level of faith, and that we don’t like having Gluck hammer his thesis to the cellar door, questioning this faith in wine.

But what if the problem wasn’t our quasi-religious belief in the transcendental nature of the experience of wine but actually that we wanted simply to transcend class, that we wanted to be snobs and that wine was the vehicle?  What Gluck was complaining about (esotericism, pretentiousness, snobbery) isn’t just the fault of the wine industry, but the wine drinkers.  Perhaps this is why Gluck’s apostasy failed to make significant waves: either the consumers didn’t want to know or – and this is more to the point – Gluck’s picture of the wine world was what they wanted.

I used the word holy above.  Like Hemming, I too was brought up in the Church of England (Catholic-lite, if you ask my staunchly Protestant grandmother) and we used to get told that to be holy was to be apart, to be special (and somewhat sanctimonious).  And maybe, in saying that wine is a cultural product, we are affirming our desire to make wine special and apart and, at the same time, showing just how snobby our domain really is.  Maybe we wine populists (for want of a better word) have been doing it wrong all this time?  Let us, in fact, let them eat cake.