ARVEYRES, France — The rabbit — the “Imperial Rabbit” — looks out quietly from the vineyard’s sign, sandwiched between the familiar words ‘‘Great Wine of Bordeaux.’’   But there are no rabbits in this vineyard, imperial or otherwise.  Nor are there any “Golden Rabbits” or “Tibetan Antelopes” or even “Grand Antelopes” in the vineyards not far away. 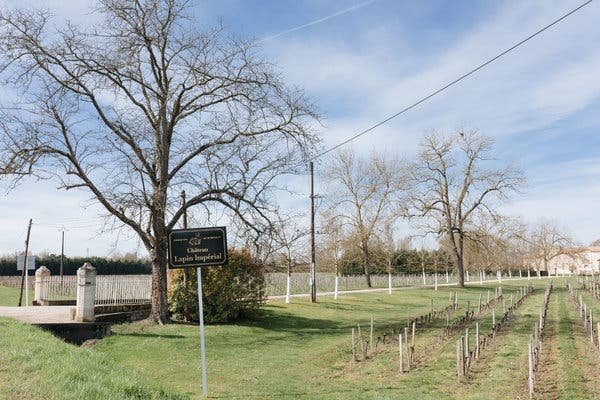 That has not stopped the new Chinese owner in one of France’s most fabled wine regions from naming his newly acquired chateaus after them — to more than a little consternation among tradition-bound French.  “Up until now, the rabbit has not enjoyed a great reputation in the Bordeaux vineyards,’’ noted Le Résistant, the local newspaper in the regional capital, Libourne.  ‘‘The trend has been, rather, to eradicate it.”

There is no place more synonymous with France and its tradition of fine wines than Bordeaux.  The style of its long-aging, leathery blends of cabernet sauvignon and merlot, to name just two, have inspired American imitators and are sought after the world over, often at exorbitant prices.

Yet despite the protestations when it comes to the Chinese, this story of invasion is not a new one for the region on the southwest coast of France.  For centuries, Bordeaux has adapted to foreign money and tastes, with a flexibility that belies the purists’ contention that tradition is inviolable.  Bordeaux accommodated the English when it was under their domination in the 12th and 13th centuries, as well as the Dutch who drained its marshes in the 17th century.  It opened its cellars to the Germans during the Nazi occupation, and more recently it shifted its taste to accommodate the preferences of the California-influenced American wine critic Robert Parker. 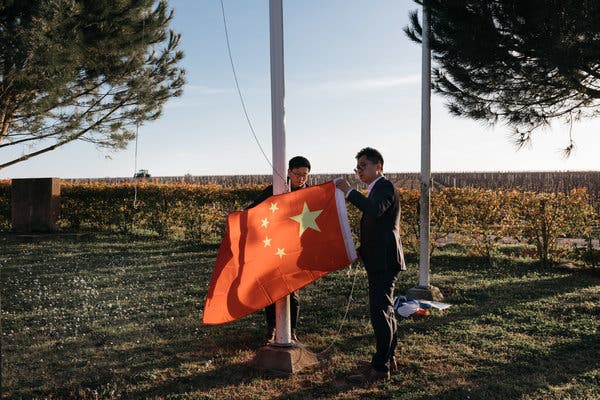 Bordeaux goes where the money is.  And the money is now with the Chinese.  “It’s a good thing there are Chinese investors, most definitely.  Because there are too many producers here, and there’s too much wine” said Nan Hu, the director general of the Clos des Quatre Vents, the sumptuous property of a state-owned energy and real estate conglomerate from China. “So, we are important to Bordeaux.”

Indeed, not all French here are so put out.

One is Jean Pierre Amoreau, a celebrated maker of Bordeaux at Château Le Puy.  Is he worried? “Not at all,” he said.  The Chinese were helping a lot of owners who, because of high French inheritance taxes, often cannot afford to pass their properties on to children, he argued.  “The Chinese have a lot of liquidity, so they are helping these owners have a decent retirement,” he said.  “And they are helping to preserve the chateaus.”

Jean-Marie Garde, a producer who heads the winemakers syndicate in the storied Pomerol district nearby, agreed, to a point.  “For the Chinese, we say, ‘Why not?’’’ he said, ‘‘they are present, but not that present.”  Still,  “We’re all a little disconcerted by this name-changing, and what’s a bit disconcerting, too, is that you never meet them,” he said of the new Chinese proprietors.

Yet they have not been entirely invisible, either.  It was startling, for some, to see the red Chinese flag floating above the Clos des Quatre Vents, within sight of the famous Château Margaux in the Médoc, maker of the highest ranked of all Bordeaux wines.

Recently, the celebrated writer Philippe Sollers wrote a reproachful open letter to the mayor of Bordeaux, reflecting the anxiety coursing through the region and protesting what some saw as audacity in changing the names of historic chateaus.

“I’m not excessively curious to know about the life of these animals, never having encountered, during my childhood in Bordeaux, the slightest ‘imperial rabbit’ or ‘Tibetan antelope’, » Mr. Sollers wrote. “Is there no way to rededicate this wine to its legitimate source, affixed by the centuries?” 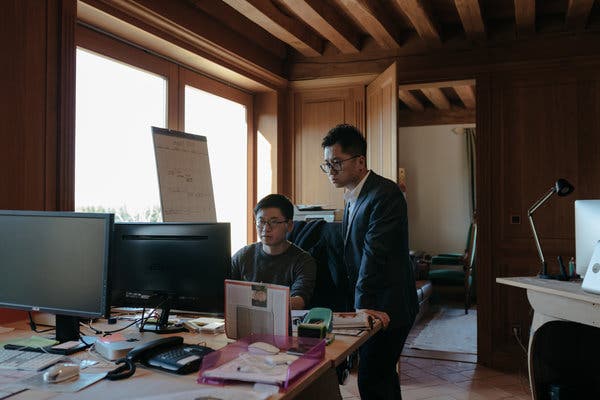 Loic Grassin, whose grandfather bought the magnificent white-stone mansion of the Château Senilhac in the Médoc in 1938, was not too keen on the name change either, after he recently sold to a Chinese buyer.  He had never even seen a “Tibetan Antelope,” as the estate was newly named.  “Look, I took it very badly,” he said.  “They debaptized it. It’s bizarre. Animals, I’ve got nothing against them. But, come on, ‘Tibetan Antelope’? Where are they coming from with that one?”

‘‘This is not about traditional Chinese culture,’’ said a leading French sinologist, Jean-Philippe Béja of Sciences Po. ‘‘It is about marketing.”  But he disputed that the strategy was in fact a good one.  “This is imitating ‘Made in China,’ which doesn’t even have a good reputation,’’ he said. ‘‘The interest, for the Chinese, is to have something foreign that belongs to them.”

Perhaps for that reason the Chinese invasion has been limited to perhaps 3 % of the roughly 6,000 chateaus in the Bordelais region.  The Chinese also have not bought any of the most celebrated wine producers, opting instead for the middling and lesser-ranked. 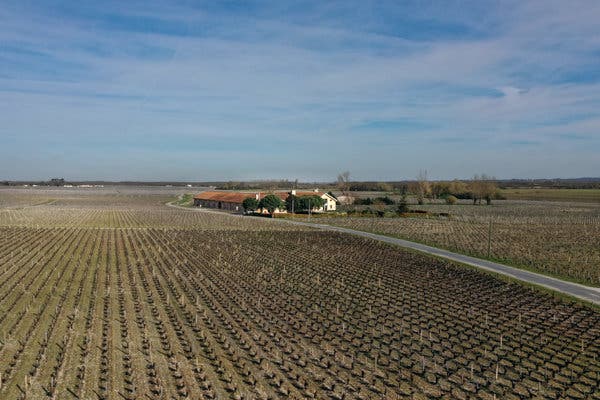 The Chinese buy middling and lesser-ranked properties such as the one above, instead of the most celebrated. Credit Andrea Mantovani for The New York Times

The Chinese imprint on the style of the wine has been muted, too, in the view of local producers.  “I see no change in style,” said Mr. Amoreau, the winemaker.  “Nobody is going to take the risk of changing this style, for a style that doesn’t really exist,” he said, referring to Chinese wines.  The Chinese owners, in fact, leave much of the actual winemaking in the hands of the French teams already in place. 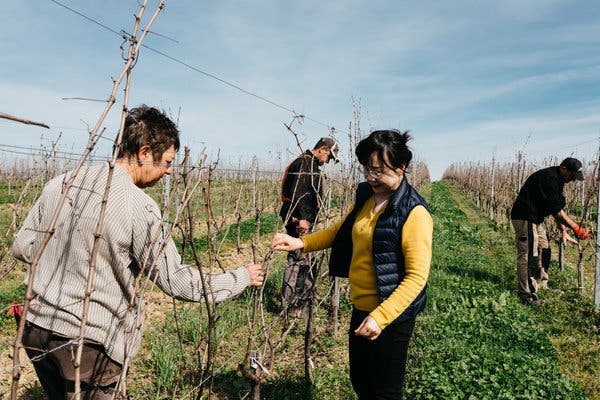 As Julia Zhang, who lives on her property near Sainte-Foy, Chinese owners leave much of the winemaking to the French teams in place. Credit Andrea Mantovani for The New York Times

Julia Zhang, a rare Chinese owner who lives on the property, in the Sainte Foy district of Bordeaux, has chosen not to change the name of her Château des Chapelains.  She could not even recall the last name of her chief vintner, Claudine Rey, acknowledging her autonomy. “Claudine runs everything,” she said.

Ms. Zhang lives alone in her old stone farmhouse, isolated in the vineyards, her real estate-rich husband far away in China.  She speaks almost no French or English and communicates with her staff through an associate. “It takes a lot of courage,” said Laurent Chu, a Franco-Chinese who works for Bordeaux’s chamber of agriculture and serves as liaison for many of the Chinese owners.

Is Ms. Zhang changing her small corner of France, or is France changing Ms. Zhang?  The evidence suggests the latter.  “I want to be like the French,” she said through Mr. Chu. ‘‘Some of these Chinese investors, they’ve kept their Chinese mentality,” she added.  Others agreed. The Chinese owners “want a return quickly, in two, three years,’’ said Mr. Hu of Clos des Quatre Vents. ‘‘If they don’t see results quickly, they say, ‘Hey, what’s going on?’”

Chi Keung Tong, a Hong Kong businessman, and his mainland compatriots have bought some 150 properties in the last decade.  Among them is the ‘‘Imperial Rabbit,’’ actually Château Lapin Impérial, formerly the venerable Château Larteau, a property dating back to 1776, on a peaceful stretch of the Dordogne river 30 miles from Bordeaux.

He did not want to talk about the name change, and neither did the nervous French gatekeeper at the estate, before she shooed away unwelcome visitors.  “No, no, no, it’s not rabbits, it’s hares!” she insisted.  “We’ve got hares, we’ve got deers, we’ve got everything, but we don’t have any rabbits,” she said, before stating the obvious: “things have changed around here. »