It’s only May, but it seems likely that we already know the headline story of 2017 for French vineyards, and to a lesser extent for those elsewhere in Europe, too, the UK included.  It’s one of savage spring frosts coming after a generally mild early spring, with almost no region in France unaffected, while some regions (notably Bordeaux) have experienced the worst frosts for a quarter century.

The exact extent of the damage will become clear over the next month as flowering takes place in the vineyards.   May and June’s own weather patterns, too, will have an impact on the recovery potential of the vines.  Frost is almost as unfair as hail, with some vineyards being totally destroyed while others not far away, or a little higher up a slope, escape unscathed.  But estimates in Bordeaux, Cognac, the Loire, Champagne and Alsace suggest potential losses of between one quarter and one half of the potential crop, and with both Burgundy and the Languedoc sustaining significant damage, too.  Entire appellations have been affected.  Only 10 per cent of he 2017 Savennières crop is reported to have survived the April frosts.

France (where the frosts principally struck between the 20th and 27th of April) has received most coverage, but Italy was affected a little earlier, too (17th to 19th April), with flatland vineyards in Piedmont, Tuscany, Veneto, Marche and even Abruzzo damaged.  Franciacorta and Gavi have severe problems; Prosecco prices will rise.

The forecasting of the frosts was accurate, and they came over an extended period rather than in a sudden, unanticipated burst.  This meant a full panoply of strategies to combat the damage for those who could afford them, and for those facing the challenge of a classic radiation frost.  (Advection or wind frost has little short-term remedy.)   We’ve all seen the dramatic ‘wartime’ scenes of vineyards filled with combative flames and smoke, but April was a very good month for helicopter hire companies, too.  Those without resources will have suffered most acutely – and a spring frost cull is a genuine tragedy for vulnerable winegrowers: those who live exclusively from the proceeds of the previous harvest.  Half a year’s earnings can disappear in a single chill night.  This, of course, is the reason that one of the fundamental parameters for vineyard viability is frost susceptibility. 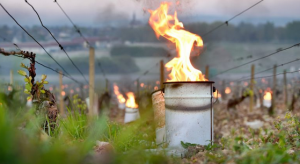 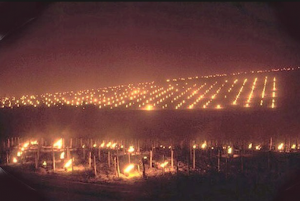 In regions such as the Loire and Burgundy, this is the second year in succession where spring frost has slashed the crop (frost affected one third of Burgundy’s vines last year, while some Loire appellations lost half or more of their crop).  Thus for Burgundy, it extends a run of profoundly unhelpful ‘short’ vintages at a time of unparalleled global demand : 2010, 2012, 2013 and 2016 all saw significantly reduced crops, with 2011 and 2014 marginally down on the region’s full potential.  Hail and generally miserable spring and summer weather were the main culprits prior to 2016, though there were isolated frost episodes too.

I remember researching the effect of climate change in Chablis back in 2012 and being told that, apart from a small frost in 2003, the last major frost had been in 1997 – whereas (for example) in the 1950s, 1951, 1953, 1957 and 1959 were all major frost years.  The Chablis growers’ consensus in 2012 was that climate change had neutralised the frost danger, but greatly intensified the danger from hail.  So what are we to make of the damaging frosts of 2016 and the terrible frosts of 2017?

One possibility is that they are anomalous: an outlier phenomenon running against a trend.  Another conclusion is that they may indicate that the trend is less rapid than we had assumed it might be, and that 2016 and 2017 therefore offer growers a reality check.  A third is that they are simply part of a trend towards more extreme and unpredictable weather events of all sorts.  But there is a fourth possibility which merits consideration, which is that certain phenomena connected with global warming may in fact increase rather than decrease frost risk.  (I’d like to express my gratitude to Professor Michael Summerfield, formerly of the Geography Department of the University of Edinburgh, for his help in researching this topic.)

Before I outline the theory, I should caution readers that any conclusions about long-term climate change based on data from a run of a few years are hazardous in the extreme, and highly speculative.  Not only that, but the mechanisms at play in climate equations are so complex as to make them eminently susceptible to mis-interpretation.  Climate is of such significance in our lives, though, that it would be imprudent not to try to understand these phenomena.

Wine growers cannot fail to have noted that the dates of budburst for particular varieties/locations has been advancing over the last two decades — but so, comfortingly, has the date of the final frost within a given spring period.  Indeed a paper published in the Australian Journal of Grape and Wine Research in 2014 by Dr Daniel Molitor and five colleagues suggested that, based on data from seven Müller-Thurgau sites in Luxembourg collected since 1950, the dates of the last frost event in spring is actually advancing even faster than budburst.  Extrapolating from this data, the authors suggested that the trend would continue, and that frost events after budburst would greatly diminish in frequency in future for these high-latitude vineyards (and thus, we might assume, for others too).

What, though, if new elements come into play?  One such element in the mid-latitudes of the Northern Hemisphere (where the vast majority of the world’s vines are found) is the impact of temperature changes in the Arctic, and especially the reduction in Arctic sea ice and high-latitude snow cover, on atmospheric circulation.

If there is less ice and snow in the Arctic, then less sunlight is reflected back from the earth into space (a reduced albedo).  This will mean increased evaporation and transpiration – and that in turn will alter the behaviour of the polar vortex (the upper level low-pressure area lying near the earth’s poles).

In the Northern Hemisphere, this rotates counter-clockwise above a large mass of cold, dense arctic air.  When the vortex is strong, the mass is well contained.  When it‘s weak, by contrast, the flow becomes disorganised and bulges of arctic air can push out down towards the equator, like a kind of freezing aerial hernia sliding irregularly into Northern Europe, North America and Central Asia.  Increased evaporation and transpiration consequent on reduced albedo weakens the vortex.

It’s important to note that this isn’t the only influence on the polar vortex.  Others include Eurasian snow cover, positive and negative phases of the AO (Arctic oscillation), the QBO (quasi-biennial oscillation), the El Niño/Southern Oscillation and solar activity.

Nonetheless, the fear for growers of vulnerable fruit crops such as grapes is that the dramatic warming trend we have observed over the past two decades will continue, leading to earlier and earlier budbreak.  That same trend, though, will also melt Arctic ice and snow, creating a consistently weaker polar vortex during winter and early spring months when it is normally strong (it’s always weaker in summer) – hence a greater likelihood of sudden irruptions of freezing air into winegrowing regions post-budbreak.  That could be a catastrophic combination – as it has been this year.