Pope Francis is a cool dude.  The Pontiff has captured the attention of people around the globe by spending much of his time addressing the cruelties in the world and attempting to curtail them.  He has ridiculed the Church’s obsession with abortion, gay marriage and contraception, all while he has promoted genuine respect for all. 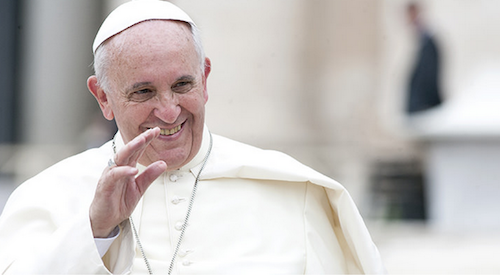 The Pope even has a sense of humor for God’s sake (see how it is funny?).  But at the end of the day, he actually seems like an ideal candidate to share some wine with, and truth be told, if he had the time, he would be down to indulge with you.  Because he became even cooler as he recently claimed that wine is a necessity.

His exact words were: “Water is needed to live, but wine expresses the abundance of the banquet and joy of the celebration,” later concluding: “Wine is necessary for the celebration.”

We could not agree more with this holy statement.  Wine beautifully eases the tensions of life and allows for camaraderie to flourish.  Pope Francis certainly champions the pleasures of wine, but is he the only Pope to do so?  Well, maybe to this degree of explicitness.  But, it is highly unlikely that he is the only Pope to enjoy vino, for sacramental wine is historically rooted in the Church.

The Vatican even has a vineyard named after it called Cuvée du Vatican, which former Popes have given blessings to and drank the wine produced here.  Wine has always been a friend of the Church.

If you’re struggling to find someone to invite to your dinner party, Pope Francis may be your guy.