It’s not all multi-million euro mansion houses and vineyard estates in this vaunted appellation on Bordeaux’s Left Bank.

‘It’s not like we get a knock on the door every single week asking us to sell,’ Alain Albistur is telling me. ‘But we know they are listening’.

The others in the room nod at this, before his neighbour Gérard Bougès adds, ‘and also we know that we benefit from the power of the Pauillac name.  And it’s nice to know that if we want to retire, it’s going to be possible.  That’s not quite so easy for friends with wine estates up in the northern reaches of the Médoc’. 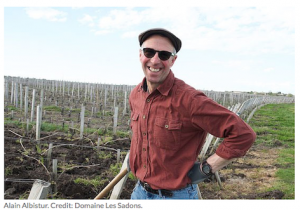 We are stood in the small back room of Domaine les Sadons.  It’s a short two minute stroll here from the D2 « route des châteaux », just set back from Château Fonbadet in Saint-Lambert.  Out of the window we can see the vines of Pichon Baron stretching away.  Albistur himself has only 87 ares (just over 2 acres) of vines in the appellation, and is well aware that he is unlikely to ever have any more of what is perhaps the most expensive agricultural land in France.

Just this small amount is worth something close to €1.5 million, maybe €2 million considering their location, even though he only produces 500 cases a year.  He has spent most of his career working as cellar hand at Grand Puy Lacoste – still his day job – and works his vineyard on the side, the first generation of his family to make the leap.  Until 1997 the patch of land that is now vines was a vegetable garden but he was able to plant by using planting rights from his brother-in-law, only able to take over himself in 2006 – at first using old barrels from Pichon Baron.

There is always someone willing to relieve you of your vineyard

In the room with us are four other producers, the ‘little guys’ of Pauillac.  There are other independent producers in the appellation – Fonbadet, Château Gaudin and Château Dompierre to name a few – but they are larger, at 12ha, 4ha and 2.3ha respectively.  The producers that Albistur has gathered for this tasting all own just above or just below one hectare, or 2.5 acres, of vines – a precarious position in an appellation where there is always someone with deep pockets willing to relieve you of them.

Yannick Mirande of Château Chantecler has experience of exactly that.  His family sold 12 hectares of vines in the village of Pouyalet to Mouton Rothschild on ‘May 15, 2004.  I will always remember the date’. This was Château La Fleur Milon (you can still see the name on a cellar building, although the vines have become part of Mouton and Clerc Milon today).  Mirande was able to keep just under 3 acres, bottling them under the name of the former second wine.

Others here have benefitted indirectly from the rapacious attitude of the big guys.  Adrien Lagneaux, owner of Château Petit Bocq in St-Estèphe, picked up 1.2 acres of vines in Pauillac back in 2010 from a ‘stubborn independent producer who refused to sell to the big names’.  Split over two plots near Châteaux Clerc Milon and Pibarnon, this one goes for a full polished Pauillac expression, aged in new oak barrels from 12 different coopers, vinified in their cellars in St-Estèphe (where the wine is sold for half the price, €22 for Petit Bocq instead of €44 for the Pauillac).

The other two producers, Gerard Bougès at Château Le Fon de Berger and Sophie Martin at Château Julia both work vines that have been in the family for generations but were until recently sold to the cooperative cellars La Rose de Pauillac.

Bougès’ 2.69 acres of vines (‘the numbers after the decimal point are key at this size’ he says with a smile) were planted by his great-grandfather.  From 1999 his father began bottling a part of the production himself, but it was only with the 2015 vintage that the 29-year-old Bougès himself took over and began 100% château bottling.

Over at Château Julia, Martin has only a small part of the family vines, with the rest still being sent to La Rose de Pauillac, where her brother is Vice President.

‘I have 62 ares (1.5 acres) on the Route de Château, mainly small plots opposite Cordeillan Bages, the smallest of which is just 22m2,’ says Martin.  ‘They had been going into La Rose de Pauillac since its creation in the 1930s, but the lack of control over them became frustrating, so when the five-year contract came up in 2009, I took them back and now vinify in buildings that used to be our family farm’.

Although these are vines that have been in the family for generations, she was effectively a first time winemaker, borrowing equipment from friends (including Albistur, just as he had done a few years earlier) and still works with a succession of consultants ‘until I really find a winemaking style that suits me’.

Bougès says that the differences between the big and small players in the appellation manifests in many different ways. ‘Whatever your size you have the same amount of paperwork to do, although the large Pauillac estates have more hands on deck. And we have far smaller travel budgets’.

‘And it’s not even worth trying to hand it over to our children because of taxes,’ says Mirande. ‘There’s no point crying over it, as we will be compensated in other ways. It’s tough to know that I will be the last of the family to have this life, but the money will help, it’s still something to pass on’.

‘It’s true that in Pauillac almost all of us would make more money by selling our land than making wine,’ agrees Albistur.  ‘You have to love it to work as a tiny producer here, but I do want to hand over to my children, and am trying to find ways to perhaps sell some of the vines and keep the rest.  I like the idea that if you give them vines, you also give them work – because if they don’t work it themselves they’ll never make anything’.

The styles vary widely, as you would expect from estates that are true reflections of personal efforts.  And if they don’t always have the polish of classified Pauillac, then the prices of these wines (Lagneaux aside) are also distinctly old school, with consumer prices of €26 for Chantecler. €25 for La Fon du Berger, €25 for Château Julia, €23 for Les Sadons.  The names also are usually a reflection of something personal to them, rather than something inherited over the centuries.  Les Sadons, for example, is a unity of measure that equals 850 vines.  ‘Not far off what I actually have’ says Albistur.

And the Domaine part?  ‘I didn’t want to call my estate a château,’ Albistur says, ‘it just didn’t feel like me’.

Château Lafon du Berger AOC Pauillac 2014
From a blend of 80% Cabernet Sauvignon, 20% Merlot, lovely austerity on display, with the 70% new oak given attractively smoked tannins (they use four different coopers and four different barrel toasting methods). Grip and power, if a touch drying on the finish. Enjoyable for medium term. 88.

Domaine Les Sadons AOC Pauillac 2014
Aged in 30% new oak from five coopers and five different toasting levels (upped in 2016 to nine different coopers, pretty amazing for such a small production but reflective of his professional life in callars I guess), this has a beautiful polish on the finish. A classic Pauillac expression of cassis, methol and cedar, excellent value and a lovely wine from 72% Cabernet Sauvignon, 25% Merlot, 3% Petit Verdot. 91.

Château Julia AOC Pauillac 2011
Low SO2 at bottling because this was early days and she got the levels wrong, Martin admits with disarming honestly, but it has worked out excellently. This is floral, delicate, nicely placed, a very pretty wine that is ready to drink. Touches of caramel are flecked through the intense cherry fruits from a blend of 80% Merlot and 20% Cabernet Sauvignon. 88.

Lagneaux à Pauillac AOC Pauillac 2011
This is rich, intense, powerful, from a plump blend of 80% Merlot, 20% Cabernet Sauvignon. Toasty grilled almond and dark chocolate, from the (now unusual) method of 200% new oak, which means vinifiyting in new oak then transferring into new oak barrels for ageing. Certainly an approach aimed at creating maximum impact. Gourmet and sexy, if a little much for the vintage. 89.

Château Chantecler AOC Pauillac 2010
With a beautiful depth of dark fruit, this is classic Pauillac. A big wine, definitely one that will continue to develop over further ageing, blackberry, cassis held in place by still-tight tannins. A blend of 40% Merlot, 60% Cabernet Sauvignon, aged in 60% new oak. 14.4%abv. 91.

Hauts-Iris IGP Vin de Pays Atlantique 2015
I mention this one just as an interesting aside. The winemaker is based in Pauillac but his vines are just outside the appellation, so bottled as Vins de Pays Atlantique.  Certainly a good value option – grown with no chemical weed killers, a distinctly Medoc blend of 50% Cabernet Sauvignon, 40% Petit Verdot, 10% Merlot.  Very much an emphasis on dark fruits, low tannins, good for early drinking. 85.