Although most studies have shown that pregnant women can have 1-4 glasses of wine a week and in Italy the practice is followed religiously with no significant defects in the new-borns, the latest law forcing the producers to double the size of the pictograph warning on the back label of the bottle has caused a lot of resentment among producers who feel this is a half-baked measure and the government should focus on educating women about the importance of moderation drinking 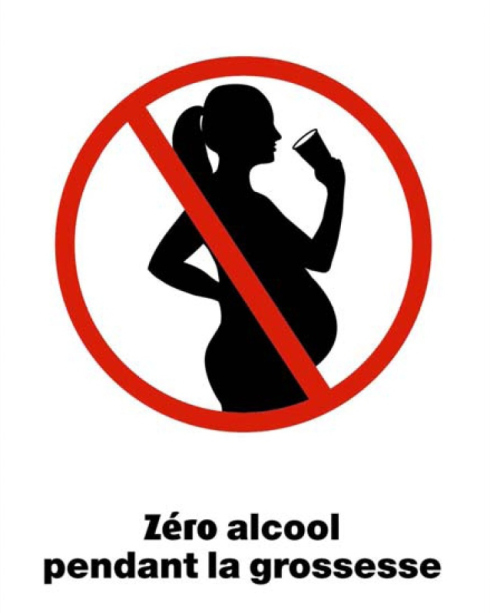 Producers are required since 2007 to print a health warning for pregnant women on the back of wine bottles as a written warning or a logo showing the silhouette of a pregnant woman drinking from a glass inside a no drinking red symbol.  Measures were announced last month to increase the size of this pictograph to at least 1 cm. from the existing half a centimetre.

According to a report published by the inter-ministerial committee, alcohol consumption in France during pregnancy is the leading cause of non-genetic mental disabilities in children, with 0.1% of the infants born having foetal alcohol syndrome.  The committee felt that the warning is drowned out by other required information on labels.  The Ministry of Health hopes to enforce the new size requirements within 2017.

For many producers, this is an ineffective solution to the important problem.  « We are in favour of fighting it but we ought to encourage more significant measures like investing in prevention and training conducted by medical personnel.  This would be much more effective than simply amplifying a logo,” says Hervé Grandeau, President of the Fédération des Grands Vins de Bordeaux (FGVB).

Grandeau adds, “There has been no study of alcohol consumption by pregnant women since the warning came in.  We don’t know if it works.  Today it’s a larger warning, tomorrow they’ll want more colours and soon wine labels will be drowned in health warnings.”

Bernard Farges, who represents another Bordeaux winegrowers’ association, said producers feared the government would eventually impose “bottles similar to plain cigarette packets,” which have been introduced in France to combat smoking.

In a recent research in UK they had found one in three pregnant women binge drink.  A quarter of French mothers-to-be continue to drink alcohol, according to the National Institute for Health and Medical Research.  The government hopes the new warning with double the logo size might increase awareness of the dangers of drinking alcohol during pregnancy.

Attitudes have traditionally been more relaxed in Italy and France where women find the idea of going through nine months of pregnancy without alcohol as totally alien.  Some claim that doctors reportedly even recommended a daily glass of red wine during pregnancy for their grandmothers.  Once such young mother who delivered a baby last year said her 82-year-old grandmother told her it was ridiculous for her to forgo wine.  She couldn’t understand why she wasn’t drinking.  The grandmother told her she never changed her habits when she was pregnant and no one told her wine wasn’t good for the baby.

Based on several studies and the articles published on our website www.indianwineacademy.com , and the dietary guidelines by several evolved countries, delWine suggests up to 2 glasses of red wine in a week-spread over half a glass in each sitting and preferably spread out by at least a day.  We believe that changing the logo size will not make much of a difference just as in the case of cigarette packs.  But the producers do not need to panic as it would not affect the sales very much.  It would be pertinent if they shared their personal experience when their wives, daughters and daughters-in-law were pregnant to instil some confidence for taking limited amount of wine.