Below, picking up rare grapes at the Maribor Old Vine Festival 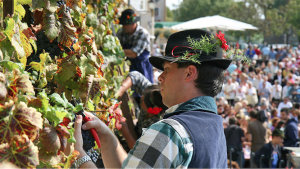 While walking around the old part of the city, you may, however, miss this natural wonder if you walk too quickly past Vojašniška street.  There, leaning up against a non-descript pale eggshell house is a lone, ash-colored trunk.  A simple, black steel fence protects this branch-like structure, which looks as if it has been petrified and never removed from where it resides.

But while the trunk may look ancient and old, as you walk toward the vine and look up you are greeted by lush, forest green leaves climbing up the wall of the house.  A little closer look and you will notice huge bunches of plump grapes hanging from the vine, just waiting to be plucked.  Meet “Old Vine,” or Stara Trta, the oldest grape producing vine in the world that’s still very much alive and well.

Standing tall next to what is now known as the Old Vine House (below), this viticulture beauty has not moved since it was planted back in the 1500s – meaning it has been in that same spot for nearly 500 years.  In fact, it you stop by Styrian Provincial Museum in Austria, you can find paintings of Vojašniška street dated around the end of 1600s, and in the artwork you will find Old Vine, leaning up against nearly the same building as the Old Vine Museum is today, 8 Vojašniška Street, overlooking the Drava river (below). 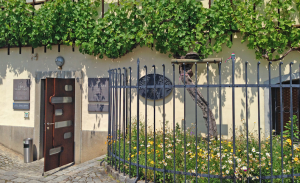 That is not the only record of this vine’s extensive age.  In 1972, a professor from the University of Ljubljana declared after some light drilling and investigating that the vine showed the age of 375 years if not older.  This vine is truly an antique and has gone against the odds to stay alive.

And the odds were not always in her favor either.  Remember Napoleon?  Old Vine withstood his rampage. Remember World War I?  Old Vine stood strong through the conflict.  This vine did not let anything get in her way.  The city was occupied by the Nazis and bombed during World War II.  We will repeat: the city was bombed in World War II.  Yet, the building and Old Vine survived.  Not only did it survive, it still pumped out grapes for wine.  Can you imagine trying to push out grapes while your city was being occupied by the Nazis?  Back in the 80s the industrial progress almost destroyed the vine, but responsible people managed to save and protected it with a special decree. Since then, the old vine flourishes

That might be just what is keeping the vine going.  You know the stories of elderly people claiming that eating for the love of food or working a job they were passionate about kept them alive?  Vines produce grapes when they are stressed because they want the grapes to get picked up by wildlife and taken somewhere else so the vine can grow and live in peace.  So for a vine to be this old and still be pumping out grapes it probably has more stress marks than your father after you got your driver’s license (below, Tasting the Old Vine’s sweet grapes during the Maribor Festival). 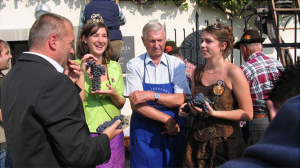 Stress aside, let’s talk about the fruit.  The large bunches of rich, dark grapes are beautiful on the vine and are also beautiful in the glass.  Old Vine grows one of Slovenia’s noble grapes, Žametovka (or Modra Kavčina) variety, one of the oldest (surprise!) red wine varieties cultivated in the country used for a wine called Cviček.  These grapes are super juicy and sweeter than candy – a sweetness and richness that comes from Old Vine’s age.  As the vine gets older it does not grow as many grapes but the quality of what is produced goes up exponentially.  Basically these grapes are super high quality, and since they come from the oldest vine in the world, they’re one of a kind.

So where do you send one of a kind grapes to age into one of a kind wine?  Underneath the roots of the vine itself.  Below the city of Maribor lies the Vinag wine cellar (pic below), one of central Europe’s oldest cellars.  The cellar is huge, dark, a little musty and has tunnels that stretch around two and a half kilometers.  So while you’re taking a tour through the underground wine-dungeon, the Old Vine juice is transforming into an extremely small batch of sweet vino. 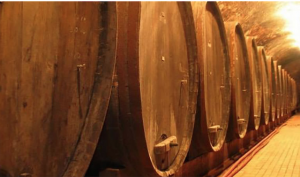 When we say small batch, we really mean it.  Old Vine only produces about 35 to 55 kilograms of fruit each year, so the wine is a little bit hard to come by.  So hard to come by, that only about one hundred 250 milliliter bottles are made each year.  We are dying for just a single sip of possibly the rarest wine in the world and we imagine you are too, but there is not even a waitlist for this one.  Old Vine does not go through all of this stress for just anyone.

This vino is so rare, so special, that the city of Maribor only gives it out as gifts to dignitaries, officials and other prominent figures.  So unless you have some connections to the Pope, Bill Clinton or Arnold Schwarzenegger, you might be out of luck (and it might be time to make some new friends).  But wine isn’t the only commodity of Old Vine that is shared with gratitude: each year, Maribor gives a graft of Old Vine to a noble city in order to spread the love of wine, which allows new vines to grow. Maybe letting Old Vine migrate like it has wanted to do for the past 400 years is the city’s way of saying, “sorry for stressing you out so much and making you grow grapes.”

While we may or may not be willing to sell the rights to our first-born child for a bottle of Old Vine’s wine, with such extreme rarity, rich history and superb roots this wine might be one to cherish with our eyes and handle with care, just like the magnificent vine from which it came.

At the back of the museum in the small enoteque you may choose to try 3, 5 or more wines at affordable prices from different regional wineries without the need to travel far from the shadow of the Old Vine, such as those of the family Steyer Winery, a sauvignon blanc of M-Vina and the fresh zeleni silvaner of Gaube.  In recent years the region showed interest in the production of sparkling wines to a good outcome.

Slovenia is proud of its 33,000 hectares of vineyards whose location is among the 5% best places for growing vineyards in the world.

Festival photos courtesy of the Maribor-Pohorje Tourist Board.