Enjoyment Of Food And Wine Can Be Greatly Enhanced By Specific Music, Scientist Claims

An Oxford academic, behavioral psychologist professor Charles Spence, is claiming that the music we listen to when we eat specific foods can directly be connected to how much we enjoy that meal.

While Spence is not alone in his assertion that the smell, taste, and surroundings in which one eats is vital to the experience, he also believes that the music one hears can have a great impact on their enjoyment of that food.  He explained, “Can we capture aromas or bouquet musically? Composers around the world are working on this. Are wine writers merely filling column inches with this use of the musical metaphor or are they picking up on some underlying truth? We think they are.” 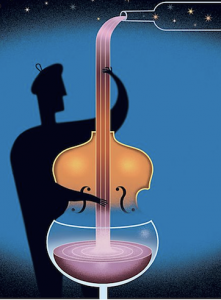 For example, claims Spence, “We have found that people can experience 15% more pleasure if music matches the wine.  It is an exciting area: how soundscapes come together with taste to make the whole experience more enjoyable …  It’s a kind of digital seasoning.”

In order to demonstrate his theory, Spence, who was in Berlin at the time, gave people chocolate to eat while two different pieces of classical music were played.  One track was a little dowdy and sombre and the other was lighter and more uplifting.

As Spence explained, “Tinkling music – high-pitched piano – draws people’s attention to something in chocolate.  Music cannot create tastes or flavours that are not there in your mouth, but it can draw attention to certain notes in a wine or food that are competing in your mind.”

“We tested the four best wine experts in the Alicante region and fooled them all by colouring white wine red,” said Spence.

In conclusion, Spence also noted that appreciation of taste is also heavily related to the position of the moon.

“The moon can,” he said. “We find that when our team has a strange result in tasting, it corresponds to a moment in the lunar calendar.”