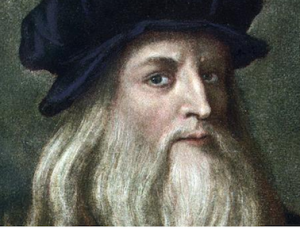 A vineyard that once belonged to Leonardo da Vinci has been recreated down to the last detail by Italian experts nearly 500 years after his death.

After a decade of research including genetic testing, they now hope to be able to produce the same crisp white wine that the Renaissance genius once enjoyed from his own estate.

Leonardo may be best known for his remarkable paintings, sculptures and scientific inventions, but true to his Tuscan roots he was also a keen lover of the grape.  He was given the vineyard in 1499 as payment for the painting of The Last Supper by Lodovico Sforza, the Duke of Milan, who commissioned the tableau.

Leonardo, who died in 1519, bequeathed the vineyard to two of his most loyal servants and it remained in existence untilWorld War II, when it was razed to the ground by an Allied bombing raid in 1943. 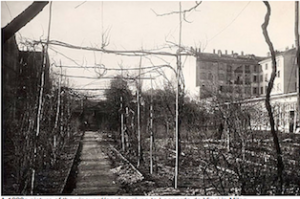 The plot of ground now forms an immaculately tended walled garden inside a grand palazzo known as the Casa degli Atellani in central Milan.
Working with the family who own the property, researchers excavated the garden.
To their surprise and delight they found that a few vine roots had survived.

(Left, a 1920s picture of the vineyard/garden given to Leonardo da Vinci in Milan)

They subjected the roots to genetic testing at the University of Milan and were able to identify the exact type of vine that Leonardo had planted — a variety known as Malvasia di Candia, which is still grown in the hills around Piacenza inEmilia Romagna south of Milan.

The experts have replanted Malvasia di Candia vines, recreating Leonardo’s original vineyard, in the garden of the palazzo in Milan’s Corso Magenta.

The vineyard will be opened to the public for the first time in May, to coincide with the start of Expo 2015, the world fair that is being hosted by Milan.

« It’s a unique way of demonstrating to the world how art and wine in Italy are closely intertwined, » said Gabriella Bechi from Confagricoltura, an Italian agricultural organisation that sponsored the recreation of the vineyard.

« No other city in the world can boast the honour of having the remains of a vineyard once owned by one of the greatest geniuses in history. »

The garden di Casa degli Atellani (left) is just a short distance from the Church of Santa Maria delle Grazie, where Leonardo painted The Last Supper.

The project was led by Prof Attilio Scienza, an Italian expert on the DNA of vines, Serena Imazio, a geneticist, and Luca Maroni, a renowned oenologist and an editor of wine guides. « Our research started in 2004. We were able to identify the plot and the last surviving vines. I was amazed – to think that a treasure like this had fallen into oblivion, » Bechi told Il Fatto Quotidiano, an Italian newspaper.

Leonardo was born near the Tuscan town of Vinci, the illegitimate son of a lawyer, in 1452.  At around the age of 30 he moved to Milan to work for the ruling Sforza family as a painter, sculptor and architect.  He painted The Last Supper in the refectory of the Church of Santa Maria delle Grazie between 1495 and 1497.

Milan Expo 2015 will feature around 60 pavilions and contributions from more than 130 countries.  The main theme of the world fair will be nutrition.