I’ve always been a wine-discovery junkie, constantly on the hunt for new grapes, new vintages, new winemakers, and especially new places where vines may never have been planted before. Thanks to ambitious vintners, rising demand from drinkers, a taste shift to lighter wine styles, and yes, even climate change, the number of global hot spots for wine is ever expanding. If you’re still rattling off the names of the old, long-famous regions, you’re way behind the times. In these eight spots, good wine is on its way to becoming great wine, with a few stars leading the way. 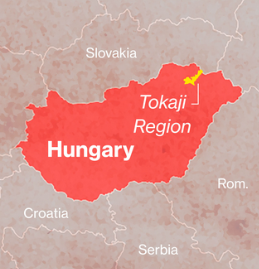 As Eastern Europe’s class act for wine, the historic Tokaj region is getting a €330 million ($374 million) investment over the next five years to upgrade its vineyards and bolster its reputation. (Under communism, quantity was prized over quality.) Its 5,500 hectares of vineyards, at an 800-foot elevation on volcanic slopes, are devoted primarily to three native white grapes. They include hard-to-pronounce Hárslevelü and flagship furmint, which is the key varietal in the luscious sweet wines associated with the region. The latest craze, though, is a newly available dry version of furmint, Hungary’s alternative to chardonnay and riesling.

Try This Now: 2011 Istvan Szepsy Betsek Furmint ($75). Smoky, citrusy, rich, and complex, it reminds me of a great Alsace riesling.

Thomas Jefferson grew grapes in the state but failed to make great wines. Still, the modern era (starting in the 1970s) has drawn more than 240 determined vintners, including Donald Trump and AOL co-founder Steve Case. In 2014, they sold a total of half a million cases and seem now to be at the tipping point. Of the eight whites (chardonnay, sauvignon blanc, riesling, and several more), the most promising is viognier, but the best wines so far are the Bordeaux-style red blends made from cabernet sauvignon, cabernet franc, merlot, and petit verdot. A couple of top examples wowed even Eric Boissenot, consultant to Bordeaux’s first growths.

When you think of an Aussie wine, you may envision a blockbuster shiraz, but the most interesting bottles I tasted on a recent visit to Australia were pinot noirs from this cool, green valley an hour’s drive northeast of Melbourne. Though the area’s 100-plus wineries make only 4 percent of Australia’s wine, this spot is a hotbed of young ambitious winemakers. They’re mainly chasing great pinot noir and chardonnay, the region’s most planted grapes, but on the radar are a lighter style shiraz they label syrah, sauvignon blanc, and even nebbiolo.

This is the land of qvervi, the pot-bellied clay amphora lined with beeswax and buried in the earth that vintners have traditionally used for fermenting juice from nearly 500 indigenous varieties of grapes. The method and the country’s 8,000-year-old winemaking history have given its reds and whites countercultural appeal. The current wine revival was helped along by a seven-year Russian embargo that forced producers to improve and export. Among the 15 most important varietals, one red (saperavi) and two whites (rkatsiteli, mstvane) have the most global potential.

Try This Now: 2010 Pheasant’s Tears Kakheti Valley Rkatsiteli ($18). Golden amber in color, it’s round, ripe, and fleshy, with notes of apricot and spice.

Global warming and the same chalky soil as France’s Champagne region make its south coast a natural for sparkling wine—66 percent of the 4.5 million bottles produced here are bubbly.
As in Champagne, chardonnay and pinot noir are the most planted grapes. Nearly 150 wineries are betting on the future, and so far, I’ve found the best wines come from the South Downs of Sussex.

An hour and a half east of Napa Valley, zero-glamour Lodi has a long history of growing and selling grapes to outsiders. Only recently has it fostered its own wineries; now there are about 80. Land is cheap, so wine prices are low. This is red wine country and California’s zinfandel capital, providing grapes for about a third of the state’s premium zins. Vintners here craft some of the boldest examples around. But the adventurous ones are experimenting with some 70 varieties, including Spain’s tempranillo, Portugal’s touriga nacional, and Italy’s barbera and primitivo.

Try This Now: 2012 L’ Uvaggio di Giacomo Primitivo ($14). This juicy bargain has layers of spice and berry flavors, and is surprisingly complex for the price.

The 45-degree slopes of a massive, perpetually rumbling volcano in eastern Sicily don’t automatically make me think of vineyards, but in the past decade Mt. Etna has become one of Italy’s most exciting wine regions.
Thirty years ago there were five producers; now there are nearly 90 who tend vines at elevations of 2,000 to 3,500 feet. Native grapes carricante for whites and nerello cappuccio (and the even better nerello mascalese) for reds produce the best wines. The high altitude and rocky terroir translate into sultry, salty, highly distinctive wines.

This long, narrow country, with some 13 wine regions, has recently planted vineyards in extreme locations: at altitudes of nearly 7,000 feet in the Andes and in the middle of the Atacama desert.

But I’m a fan of the little-known Maule region, in the south of the Central Valley, where small-scale vintners discovered a treasure trove of old carignan and pais vines. Though the majority of Maule’s 36 million liters of wine (in 2013) are Chile’s mainstays, cabernet and sauvignon blanc, these old vines offer something truly special.