PLOP, PLOP, FIZZ, FIZZ, OH WHAT A CHAMPAGNE IT ISN’T 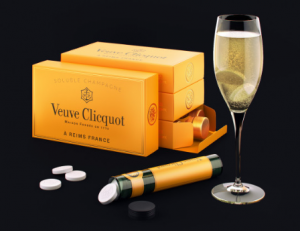 You can tell it’s August by the number of hoax wine stories hitting the Internet.

What do water-soluble Champagne tablets and a Chinese businessman’s death in a bizarre Champagne-bottle accident have in common?

Well, apart from the Champagne element, the unifying thread is that they are both fakes.

Social media has been abuzz with both stories, most recently the development of the Champagne pills, by a Russian advertising agency.

Purportedly, the pills, which come in an elegant Veuve Clicquot container, similar to a cigar tube, can be dissolved in water to produce a refreshing sparkling beverage; like Alka-Seltzer, but presumably a lot tastier.

Meanwhile, satirical website World News Daily Report has reported on the odd case of Dingxiang Leong, who came to a premature end when he was shot in the head by a Champagne cork while opening a bottle at a party to celebrate his birthday.

Apparently, Mr Leong — who is listed as Hong Kong’s 51st-richest businessman — collapsed on the spot, in front of more than 200 guests.  The fact that neither story is true hasn’t stopped social media from picking them up and blithely passing them on.

The story about Veuve Clicquot has even gone as far as Champagne’s trade body, the CIVC (Conseil Interprofessionnel du Vin de Champagne), which has launched an investigation into the origin of what it calls “this false publicity.”  A spokesperson from Veuve Clicquot’s communications department declined to comment, saying legal proceedings were under way.

As for the World News Daily Report story, you have to look quite closely to find the disclaimer on the site, which says: “World News Daily Report is a news and political satire web publication, which may or may not use real names, often in semi-real or mostly fictitious ways.  All news articles contained within worldnewsdailyreport.com are fiction, and presumably fake news.  Any resemblance to the truth is purely coincidental …”

It appears that, like the traditional print media, the Internet also has a slow news season or, as the British call it, the silly season.  Traditionally, this was the period during the summer when most people went on holiday and there was little actual news to be reported.  Instead, stories that would ordinarily be ignored assumed a much greater significance and oddities became major news stories.

The wine world is not immune either, with most European producers, along with PR companies and trade bodies taking two or three weeks vacation before harvest is upon them.  It seems this leaves the door wide open for hoaxes.

Strangely enough, while people are wary about believing everything they read in newspapers, the same caution doesn’t seem to apply to online stories, so Wine Searcher would suggest relying on reliable news sources and taking a caveat lector approach — let the reader beware.

Or to remember the words of Abraham Lincoln, who, in 1864, said: “The problem with Internet quotes is that you can’t always depend on their accuracy.”