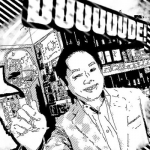 REVISITING THE REDS OF THE LOIRE VALLEY — Imagine a somewhat small region farmed primarily by myriad family grape growers, many of whom made wine for generations.  They work diverse soils, and because the reds are mostly from a single grape, comparing wines from a multitude of terroirs is fascinating.

This region has a lot in common with Burgundy, where the wines and the producers have captured the imagination of wine lovers the world over, and the accompanying prices have skyrocketed.  Yet unlike Burgundy, the wines of this particular region are not greatly in demand.  The prices are reasonable, and given the high quality of many of the wines, often absurdly good values.

This is the predicament, or the opportunity, presented by the Loire Valley, particularly the Touraine region, home of the Chinon and Bourgueil appellations.  These wines are perennially lauded by many critics as wonderfully expressive and undervalued, much the same as rieslings were 15 or 20 years ago.  Sooner or later, the public will seize on them.  But until it does, they offer a reasonably priced chance to seek out easy drinking and intellectually stimulating, soul-satisfying pleasures, sometimes in the same bottle.

Because they can be so good, the wine panel likes to check in on Loire reds every

once in a while. It’s been four years since our last visit, so we returned recently to taste 20 bottles from Chinon and Bourgueil, all from recent vintages.  For the tasting, Florence Fabricant and I were joined by Michael Madrigale, the head sommelier at Bar Boulud and Boulud Sud, and Pascaline Lepeltier, wine director at Rouge Tomate, who, coincidentally, is originally from the Loire Valley.  Both Michael and Pascaline regularly encounter public reluctance to embrace these wines.  “You have to price them cheaply so people will take a chance,” Michael said. Pascaline added, “You have to sell these wines bottle by bottle.”

Why the hesitance?  For one thing, despite any structural similarities to Burgundy, the most obvious characteristics in a glass are strikingly different.  These wines are made of the cabernet franc grape, which in contrast to the inherent charm of Burgundy’s pinot noir, seems more austere and reserved.  While the pinot noir grape seduces with sweetly fruity aromas and flavors, the cabernet franc often has a distinctly herbal quality that many Americans, more accustomed to a domestic industry that largely dreads the faintest hint of “green” in its wines, interpret as underripe and forbidding.

Even though the Loire Valley is an ancient region for making wine, it’s also new in many respects.  Tremendous improvements have taken place over the last generation, both in the vineyards and in the cellars.  No doubt it was far easier 20 years ago to stumble onto bottles that were indeed overly vegetal, or in other ways demonstrated a cynical approach to winemaking.  Back then, few American importers paid attention to the Touraine, and fewer still discriminated enough to seek out the best wines.  Now, importers have flocked to the region, accounting for the superior selection of wines that ardent fans know well.  Today, wines are far more likely to show flavors of red fruit and great minerality along with an herbal touch, rather than the overt bell pepper flavors of the past.

Over the last generation, the Loire Valley has also become a stronghold of the wine avant-garde, which has adopted minimalist techniques to make natural wines that sometimes succeed brilliantly and sometimes fail dismally, yet fascinate regularly.

The impact of these wines cannot be underestimated.  They have influenced many mainstream producers to work more boldly and thoughtfully, and to rely less on chemical viticulture and technological winemaking.

Our tasting included bottles mostly from the 2011 vintage, not regarded as particularly successful, and 2010, which was somewhat better. We also had a few from the warm 2009 vintage and the small 2012 crop.  They reflected a mix of terroirs, including alluvial soils that tend to produce lighter, easier drinking wines; limestone, chalk and clay slopes, where the most complex, structured and age-worthy wines are grown; and soils dominated by clay, which can produce wines that reflect both styles.

Surprisingly, at least to me, while we had 13 bottles from Chinon and 7 from Bourgueil, we had 5 of each in our top 10.

Our favorite wine was the 2011 La Croix Boissée (left), the top of the

line from Bernard Baudry, a favorite producer from Chinon. This is a terrific wine, year in and year out.  Since it is a 2011, it seems more immediately accessible than usual, but nonetheless it is a graceful, structured wine that will improve over the next few years, even if it is not one of Baudry’s long-agers.

By contrast, our No. 2 bottle, the 2011 La Varenne Tradition was much easier-going, intended for earlier drinking, already showing its range of earthy flavors.  At $18, also our best value.
Next came another deliciously drinkable wine, the 2010 Bourgueil Chatrois (right) from Bertrand Galbrun, a young producer.
No. 4 was another wine with the potential to age, the 2009 Bourgueil Les Perrières from Catherine & Pierre Breton, gorgeously aromatic with complex flavors of spicy fruit. 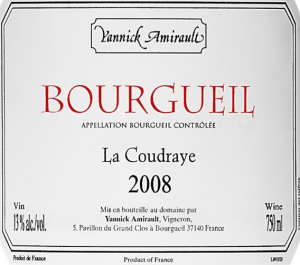 Then came the ripe, inviting 2010 Chinon Clos de la Dioterie from Charles Joguet.  Incidentally, Joguet was one of the most noteworthy Touraine domains available in the United States after Kermit Lynch began importing the wines in the late 1970s.  Mr. Joguet retired in 1997, and the wines had been inconsistent, but now they seem to be on the upswing.

Chinon and Bourgueil are by no means the extent of the reds available from the Loire, nor is cabernet franc the only red grape.  Saumur-Champigny in Anjou can produce excellent cabernet francs, and throughout you can find wonderful wines made of cabernet sauvignon, pineau d’Aunis, gamay, grolleau and côt, as malbec is known locally.

Best not to take my word for it, though. Get in on the action while the getting is good.