It’s circa 2050 and shoppers are stopping off at Ikea to buy fine wine made in Sweden.  A Nordic fantasy?
Not according to climate experts who say the Earth’s warming phase is already driving a wave of change through the world of wine.  As new frontiers for grape growing open up, the viability of some traditional production areas is under threat from scorching temperatures and prolonged droughts.  And in between the two extremes, some long-established styles are being transformed.  Some whites once renowned for being light and crisp are getting fatter and more floral while medium-bodied reds are morphing into heavyweight bruisers.

« Some people are alarmists, I prefer to be an optimist, » says Fernando Zamora, œnology researcher and professor at Rovira i Virgili University in Tarragona, Spain.  « I have no doubt that we will still have vineyards in traditional regions, but we have to think of new strategies.  And we will also have new zones for vineyards.  That’s for sure.  Already in Germany they are making fine red wine where it used to be very difficult.  And in Denmark, now they’ve started making wine. »

Climatologists working with the wine industry around the planet predict temperatures will rise by one to two degrees Celsius from now until 2050, a trend that is expected to be accompanied by an increase in the incidence of extreme weather events.

« Can any region continue to grow the exact same varieties and make the exact same style of wines? If what we know today is correct, that is highly unlikely, » said Gregory Jones, œnology professor at Southern Oregon University. 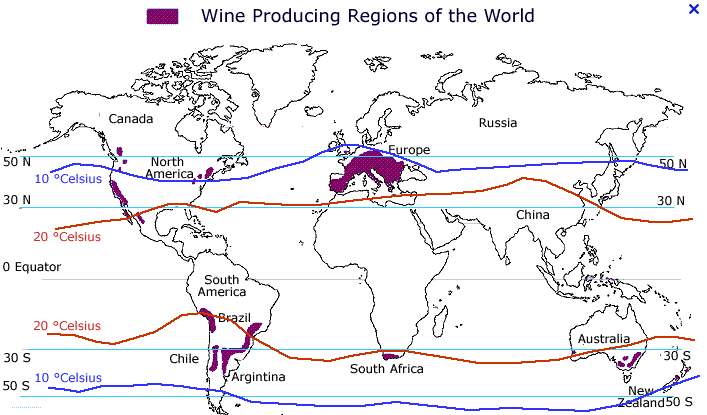 New vineyard projects in northern Europe will be risky given the increased unpredictability of the weather and the potential for one cold snap to destroy an entire crop.  So it may be that the biggest change will come in the range of wines produced in areas that, until recently, have struggled to ripen some varieties.  Tasmania, parts of New Zealand, southern Chile, Ontario and other parts of Canada, England and the Mosel and Rhine areas in Germany are among the regions that could benefit from climate change.

« You can look anywhere in the world where there are relatively cool climate regions that today are much more suitable than they were 30, 40, 50 years ago, because the climates were too cold then.  People couldn’t ripen fruit, » added Jones.  Like Zamora, Jones forms part of an international committee for the agriculture and forestry climate change programme (ACCAF) run by France’s research institute INRA.

They are tasked with formulating strategies for helping everything from the plant to legislators cope with climate change.  While wine grapes might not be necessary to feed the Earth’s population, the grape vine is more sensitive to climate than plants like rice, corn and soyabeans, which could provide valuable insight for essential future food supplies.

Vitis vinifera, the plant that gives us fine wine grape varieties, is a prolific wanderer that has a fine-tuned sense of the right place to take root and grow perfect grapes.  Water stress, temperature change, inopportune downpours and frosts are just a few of the variables that have profound effects on the balance of sugar and acidity, the ripeness of tannins, and the palette of aromas.

« In Alsace climate change is already a problem, because it’s changing the aromatic profile, the balance of sugar and acidity. If the consumers accept the changes, it’s not a problem.  If they don’t, it is, » said Jean-Marc Touzard, a co-coordinator of ACCAF.

Producers of Beaujolais meanwhile see warmer weather improving the quality of their product in a region where winemakers have sometimes had to add sugar to bolster alcohol levels in their quaffable reds.  « In 2003 when France suffered a severe summer heatwave, our wines tasted more like Côtes du Rhone, » said Jean Bourjade of the growers group Inter Beaujolais. « Beaujolais has seen that they can make better wine in a warmer climate, so there is a benefit.  But is there a limit to that benefit?  Does it go on forever? » said Jones.  « For ten years, they’ll be happy.  Then they’ll have problems, » predicted Touzard.

The Languedoc region around the Mediterranean already faces these problems.  Hotter, dryer weather is making the area’s already-robust wines more full-bodied and more alcoholic, at the expense, some say, of finesse.  But all is far from lost.  « In the Languedoc, the growers have already begun adapting — planting at a higher altitude and on different soils, » said Touzard.

Another solution is to change the grape varieties legally allowed under Europe’s strict appellation laws, sourcing the indigenous varieties from hot weather climes like Sicily, Greece, Spain and Portugal.  Researchers also say that once these grapes have been genetically decoded, they could be used for plant breeding.  Portugal alone has between 100 to 150 indigenous varieties that we know virtually nothing about, according to Jones.  « Some of the more southern, really warm places that have genetic material could be a real hotbed for dealing with heat tolerance in the future, « said Jones.