While the religious and social sentiments and their political and bureaucratic offshoot continue to hinder the wine consumption due to the government policies equating wine with hard liquor, Catholic wine connoisseurs and especially  from Spain would be glad to know that Pope Benedict XVI likes wines from Rioja 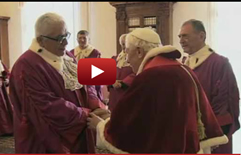 It’s not common for Benedict XVI to talk about his own tastes. But he did when he met with the tribunal of the Roman Rota.

He greeted the judges one by one, and when he spoke with one from Spain’s La Rioja region, he made a very personal comment, as you can see from this video…

‘It’s thanks to these audiences that one can learn more about the personal tastes of the Pope.  It is widely known that Pope Benedict XVI is an intellectual.  He loves music and books and during his free time does enjoy playing piano.  Now, we know that from time to time, he also enjoys a glass of wine from La Rioja with his meal‘, comments Rome Reports.

It will be interesting to see if this voluntary disclosure by the Pope makes Catholics rush to the wine shops and pick up a bottle or case of La Rioja red wines.  These wines are not exactly cheap and due to the ever-gaining popularity even before the Pope disclosed his liking, the prices have been rising steadily making it tougher to sell and for the region to grow during the previous decade.

However, it will hopefully help change the minds of the Indian government, politicians and the fundamentalist non drinkers to appreciate that wine must not be just equated with alcohol, hard liquor or treated like a thing of beauty to be talked about only in hush-hush tones.

For a long time, Rioja has been considered the Burgundy of Spain… and also its Bordeaux, despite using totally different and indigenous grapes like tempranillo, garnacha and graciano.  Rioja Alta’s cool climate mirrors that of Burgundy.  The region presents a fragmented picture because of the ‘parcelisation’ of vineyards as a result of the laws of hereditary transfers of land, which are similar to the Napoleonian laws which were responsible for the very small sizes of the vineyards in Burgundy.

Although Rioja has been producing wine for 2,200 years, the defining moment came when many of the producers from Bordeaux who were hit by phylloxera in the 1870’s decided to set up their own bodegas (wineries) in the region. The town of Haro (pronounce ah-row) was already linked with Bordeaux by rail and so it became La Rioja’s wine capital.

It is important to understand the difference between La Rioja and Rioja. La Rioja is the name of the region. Rioja is the DO, Denominacion de Origen, an equivalent of AOC in France and DOC in Italy. DOCa, or DO Classificada, means consistent higher quality. DO Rioja was the first to be promoted to DOCa status in 1991.