NO SHIT: THE NRA CALLS FOR SUPPORT FROM WINE BUYERS

The NRA (National Rifle Association of America) Wine Club calls for members to support 2nd Amendment rights by purchasing wine through their Wine Club.
New membership has soared with a donation from every bottle of wine purchased going to the NRA to support its fight to preserve the 2nd Amendment.

The NRA Wine Club’s website advises members that their « purchase will directly benefit the NRA’s continuing support of America’s Right to Keep and Bear Arms and the other basic freedoms of the American Culture. The NRA Wine Club has been founded on these principals and is bringing you the finest wines that are available. » 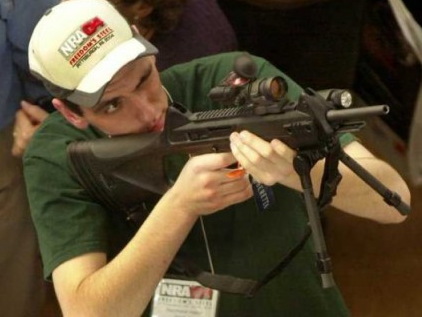 The NRA has become a political target since the massacre before Christmas and the increased demand for new gun restrictions in the US.

Now you can support the 2nd Amendment with every wine you buy runs the strapline on the homepage of the club, nrawineclub.com, which also offers new members a ‘nine-piece custom NRA engraved wine box’ when they join.

A proportion of the profits goes into NRA coffers at a time when the organisation is gearing up to battle Obama’s plans for enhanced gun control following the mass shooting at Sandy Hook.

However several brands have refused to be boycotted and are withdrawing from the NRA Wine Club.

In a welcome letter on the NRA Wine Club website, controversial NRA executive vice president Wayne La Pierre highlights the benefits of membership: supporting 2nd Amendment rights and « the convenience of home delivery on the finest wines that vineyards all over the world have to offer« .

He adds: « Your purchase will directly benefit the NRA’s continuing support of America’s Right to Keep and Bear Arms and the other basic freedoms of the American Culture. The NRA Wine Club has been founded on these principals (sic) and is bringing you the finest wines that are available. »

The club is administered by wine club specialist Vinesse and non-members of the NRA are welcome to buy wine (although they can get a rebate off NRA membership if they spend a certain amount).

Some Comments on LinkedIn Wine Groups and Decanter Newsletter

— Richard Rizzo : This is the only thing that could stop me from drinking wine.
— Xavier Cabanne likes the comment by Bill Marsano : Cynthia makes a lot of sense. This discussion is NOT about wine and this IS a wine forum.
— Cynthia Bournellis : I don’t think this topic would be in the spotlight if it wasn’t for the Sandy Hook shootings. I find the strategy a rather odd « pairing » and a desperate attempt to acquire members, but they can have a wine club if they want.
— Matthew Rasmussen – January 28: Decanter should not get evolved in something so political. Bad taste in my mouth.
— Allen Murphey : Instead of grabbing a six-pack of Budweiser and a fifth of Jack Daniels and go shoot something up, they want to show they have class by taking a couple of bottles of Silver Oak and a fifth of Courvoisier XO instead. If they can’t dazzle with their brains, they will baffle with more BS.
— Paulo P – Jan 27: I can hardly wait for the pun avalanche: This wine is to die for/ This wine is to kill for/ Gun’s & Rosés show/ This wine has gun powder aromas/ This wine has explosive aromas.
— NVB – Jan 25: I would say that seeing a winery listed here that was proud to be sold through this club would adversely affect my opinion of them.
— Martin Wiescholek : 310 Million Americans, 4.5 Million NRA members. Why can 1.5% of the population dictate what 310 Million have to do?   Worst, nobody is talking about taking anybody’s guns in the first place. Over 1000 people in the US died since Sandy Hook from gun violence. When will be stop pretending that assault riffles, mental background checks and mandatory sales through licensed dealers are a smart thing. You have to get a drivers license to drive, you have tho proof that your vision is good and that you can in fact drive. As a former race car driver I had to go through physical tests every two years just to keep my competition license. Why should you note have the same or more stringent standards for gun ownership. It’s time that the 98.5% of the population scream louder than the 1.5% and tell them to go and F… -off.
— Steve Stringer – January 25: Hopefully ethical winemakers will not be supplying the NRAAWC. Perhaps the WAAA (Winemakers Against Arms Association) can be formed in response.
— Martin Wiescholek : This is how you fight them:
http://www.thedrinksbusiness.com/2013/01/yalumba-pulls-its-wines-from-nra-wine-club/
— Jeff Barnes : Wine and guns don’t mix. I agree to quit drinking wine before I support your cause.
— Bill Marsano :  I always tune out of these ‘discussions’ soon after the first person starts ranting at the top of his lungs. Almost invariably, it’s a gliberal gun-banner.   »Living with Guns, » by the ex-NYTimes journalist Craig R. Whitney has just been published and is well-worth reading.
— Martin Wiescholek : Yeah… those loud liberals…  the gun-banners.   The poor 4.5 Million that are not heard because the 300 Million are trying to take their guns away. Yet no legislation gets passed… I wonder who is screaming the loudest?… and to make a clear statement, I hold a license to carry yet I don’t own a gun.
— Jane Goodman : First a fine bottle of petit Verdot, then an assault gun with 100 rounds. Way to go.  Raise our children in a police-like state… what a dreadful society…
— Simon Hughes : Australians will be greatly encouraged that not all Americans think alcohol and guns are good mix, but daunted that there’s not enough of them to change the gun laws.
— Rosalind Angoff : there is no relationship between wine and a misinterpretation of the 2nd amendment. This is off-message and may encourage me to drop membership to this group!