A Chinese wine connoisseur has brought a new meaning to getting smashed — by throwing a €12,000 bottle of French Alsace wine on the floor at a high-end wine festival in Changli.
The mysterious unnamed wine aficionado, who was pictured looking stern beneath reflective aviator sunglasses, smashed the bottle in a show of patriotism, hoping the stunt will show that supporting Chinese-produced wine is « priceless » — according to local media reports.

The Beijing-based bidder bought two bottles of French famous Alsace white wine for around €12,000 each at a wine festival in Changli, a wine-producing region in northern China. He smashed one of the bottles on the ground for a stunt, leaving many to speculate it was a ruse to jack up the price of the other bottle, or just shameless attention-seeking. The wine was Emile Beyer Grand Cru Pfersigberg 2007 (photos below), a late harvest white wine from Domaine Emile Beyer in Alsace. According to Wine Searcher the same Emile Beyer Gewurztraminer Vendanges Tardives, vintage 2009, would be going for a thousand times less, at €13 a bottle. 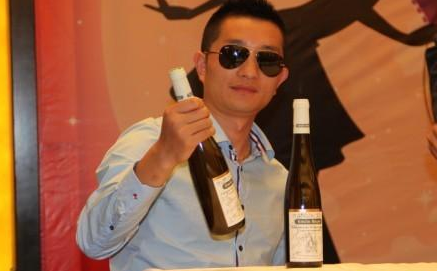 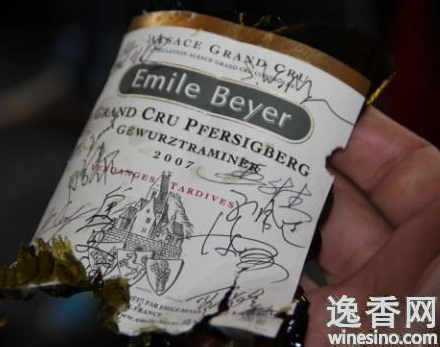 The stunt was ridiculed on Sina Weibo, China’s version of Twitter, which TeaLeafNation translated.

One reader commented: « This is not patriotism, this is stupid show-off.  If he really loves the country, he can use the money to support students who dropped out of college because of poverty or other disadvantaged groups, and that would be meaningful. But doing this only shows how ignorant and shallow he is. »

Many netizens believe the stunt may have been staged by staff at the Changli Wine Festival to hype the event, make its own publicity and promote the region’s wine and Chinese wine in general.

As China is becoming one of the largest wine markets in the world, domestic wine producers may be pulling out the stops to promote China’s own grape juices.