Throughout my recent travels tasting the 2011s in Burgundy and the Rhône Valley, in cellars there I encountered worried vignerons.
This was not the well-ventilated problem of 2012’s demanding growing season and short crop but something potentially much more serious and long term.

It was my very first stop in the Côte de Nuits, in the well-kept cellars of Denis Bachelet in Gevrey-Chambertin, that first alerted me. He is a mild man who makes delightfully balanced wines and is not given to exaggeration. But he is clearly worried about the health of his vines, and in particular the fact that they seem to be dying off at a rate of between 10 and 20% a year because of ESCA, a disease that affects the wood of the vine.

Up the road in the world-famous cellars of Domaine Armand Rousseau, Eric Rousseau told me how their revered Pinot Noir vines are dying too. A significant proportion of their 50-year-old Cazetiers Premier Cru vines are now having to be replaced each year, for example. In Châteauneuf-du-Pape, Paul-Vincent Avril’s treasured Clos des Papes vineyards have also been losing about 100 vines per hectare each year to disease. And the worst of it is that there is no known effective cure.

All that is known is that, most unfortunately, esca has so far been much more likely to affect old vines, those at least 10 years old, than young ones. I say unfortunately because the quality of wine made from old vines well-acclimatised to local conditions, with their deep root systems and relatively low yields, is famously better and more complex than the typical produce of young vines — which is why so many labels proclaim ‘Old Vines’, ‘Vieilles Vignes’ or ‘Vinhas Velhas’. I suspect that in future when I ask a vigneron for the age of a vineyard, I will be told the age of the oldest vines, not an average of the old and their much younger replacements.

But esca is increasingly seen on young vines too, and is associated with a substance known colourfully as black goo. Both wood and leaves can develop strange patterns of discolouration, generally stripes or spots (four photos above). Leaves, then stems, may suddenly shrivel in the middle of the growing season, the bunches of grapes fall to the ground and the vine suffers apoplexy, or sudden death. It’s impossible to predict how soon a vine will die after the first symptoms appear, but it can sometimes happen very suddenly, in a matter of days, particularly in midsummer in dry weather after a period of wet weathe.
(The photo, courtesy of Eden Research plc, shows the trunk damage to a 27-year-old vine affected by esca.)

Then there are at least two more nasty conditions that are currently preoccupying The International Council on Grapevine Trunk Diseases formed in 1999: eutypa dieback, also known as eutypiose, and a newer one on the scene known as botryosphaeria dieback, black dead arm, or BDA. All of them have been much more evident recently, particularly last year.

One theory put forward in an official paper on the increased incidence of esca and BDA put out by the Institut Français de la Vigne et du Vin last September is that the unusually wet spring of 2012 followed by unusually high temperatures in early summer may have stressed the vines and left them particularly vulnerable — with some vineyards suffering losses of up to 50% of vines.

It has been known since the beginning of this century that both cabernet sauvignon, much admired vine variety and the noblest grape of the Médoc in Bordeaux, and sauvignon blanc are particularly susceptible to all three of these maladies. What is even more worrying is that they seem to be spreading to varieties such as the pinot noir of Burgundy that were not previously thought to be especially prone. Olivier Bernstein of Beaune says that esca affects chardonnay particularly, and those vines planted in the 1980s.

Despite considerable monitoring and identification of various associated fungi, very little is known about exactly how and why the disease spreads. Until the beginning of this century, vines used to be treated with arsenic but, for perhaps obvious reasons, this is now banned — which may have played a part in the rise in incidence of these vine-wood diseases. 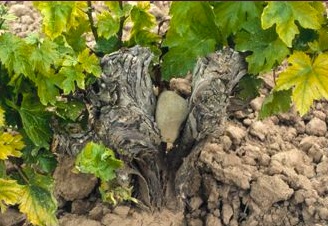 And they are by no means limited to France. They are now common in Italy and seem to have swept their way through Spain from north to south — and are now so familiar that some Spanish vintners have evolved a folkloric way of dealing with them. Vine trunks are rent asunder, the two halves wedged apart with a big stone to encourage the offending fungi to dry out, and the next year’s growth taken from a new branch that sprouts below the join. Oh, and fingers are tightly crossed.
(The photo was taken by Dr H David Thurston, Emeritus Professor of Plant Pathology at Cornell.)

The maladies are not (yet?) quite so prevalent in Germany but are becoming more so, as they are in Switzerland, where hopes are being pinned on a new pruning technique developed in Italy which may stave off the spread of the relevant fungi. One theory is that it is pruning rather than the fungi themselves that provoke the diseases. Some vine clippers inject a disinfectant.

It is all rather horribly reminiscent of the last wave of vine pests and diseases to spread through Europe at the end of the 19th century when powdery and downy mildews were followed by the most deadly of all, the phylloxera louse, fatal to European vines. At one point it looked as though the whole of French wine production was doomed, until it was realised that American vine species are resistant to phylloxera, since which time most European vines, and the members of European species that produce 97% of all wine made today throughout the world, have been grafted on to phylloxera-resistant American roots.

Mickaël Anneraud, director of the Médoc subsidiary of the local Chamber of Agriculture, has a theory that the characteristics of rootstocks may hold the key. He has noticed that even in contiguous plots in his, much-affected, wine region, vines that are 25-40 years old have been much less affected than those that are around 20 years old, when the rootstocks commonly used were markedly less vigorous than those common 25-40 years ago. He thinks it may be worth researching a possible link with vine vigour (how leafy the vines tend to be).

The Burgundians, on the other hand, feel bereft since they have no equivalent of the vast, well-funded, wine-minded University of Bordeaux. One theory is that the nurseries have been cutting corners when sanitising the young cuttings they sell, this time a worrying echo of what happened to the quality of wine corks a decade or so ago. Dominique Lafon of Meursault is convinced that although esca was worse in 2012 because of the severe temperature swings and the rain, there is an endemic problem at the nurseries. He thinks that the now common omega graft between rootstock and scion, which can be done mechanically and saves work for the nurseries, is probably more likely to promote diseases of vine wood than the traditional greffe anglaise that has to be done by hand. He told me he’d like to say to the nurseries, ‘Slow down! We’ll be happy to pay more‘.