Pigs that drink red wine have better blood flow to the heart than those that drink vodka, a new study has found. The study, conducted by Frank Sellke M.D, chief of cardiothoracic surgery at Rhode Island Hospital    (RI, USA), looked into the effects of red wine and vodka on pigs with high cholesterol.
“There has been previous research touting the benefits of moderate consumption of wine, but we wanted
to test the effects of both wine and vodka in conjunction with high cholesterol,” Sellke said. 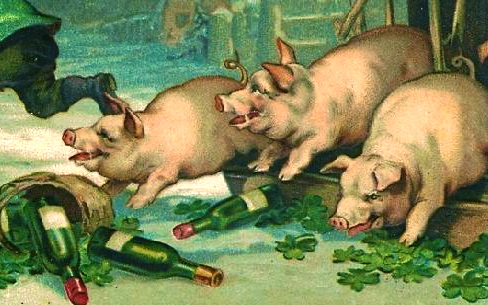 Three groups of pigs that had been fed a high-fat diet were studied.  The first group continued on the diet, while the second was supplemented with a daily dose of red wine, and the third with a daily dose of vodka.
Both the wine and vodka were mixed in with the pigs’ food with dosages specifically selected to provide equal amounts of alcohol to both treated groups.
After seven weeks, the pigs that had been given wine or vodka had increased significantly blood flow to the heart, with the red wine having the larger cardiovascular benefit.

“What we found is that moderate consumption of both alcohols may reduce cardiovascular risk, but that red wine may offer increased protection due to its antioxidant properties,” Sellke commented. HDL (good cholesterol), was significantly increased in the two alcohol-treated groups, while total cholesterol levels were unaffected. HDL transports LDL (bad cholesterol) to the liver where it is metabolised.

Both red wine and vodka may assist in preventing hardening of the arteries and other cardiac issues, though do so in different ways. Red wine dilates blood vessels, while vodka causes more collateral vessels to develop.

The study, published in the journal Circulation, sheds new light on the processes by which moderate alcohol intake might reduce cardiovascular risk. Whether these beneficial effects will be mirrored in humans remains to be seen.

Red wine has been frequently associated with reduced cardiovascular risk as it contains resveratrol, found in the skin of red grapes, which boasts antioxidant, pro-angiogenic and anti-inflammatory properties.