FROM 1982, AN OPPORTUNITY TO TASTE HISTORY

Anticipation was keen as 16 of us took our seats around a long table in the lovely art-filled, 39th-floor apartment of Mark Taylor, a longtime Bordeaux drinker and collector in Atlanta.  The six wineglasses before each of us were already filled, the fragrances rising and mingling.  Outside on this chilly March Sunday, a strong wind howled and the building itself hummed and vibrated like a giant tuning fork.  I preferred to think it was a sign of high expectations.

What wine lover wouldn’t be thrilled with the extraordinary opportunity to taste 18 bottles from the celebrated 1982 Bordeaux vintage, including all five first growths and other rare and expensive selections?  After all, the wines were now 30 years old, fully mature and, theoretically at least, in their prime.  Eighteen in one sitting? Any one might be the thrill of the year.  It was an opportunity to taste history.

The ’82 vintage is most famously associated with the rise of the American critic Robert M. Parker Jr., who was still working as a lawyer while in his spare time producing a newsletter, The Wine Advocate.  The story of the vintage is often told as if Mr. Parker stood alone to exalt it against a legion of naysayers, but the fact is that with a few exceptions, most critics at the time acclaimed the wines.  The difference was in how Mr. Parker praised them.

Not for Mr. Parker was the cautious hedging and equivocating of the typical wine critic.  His praise was clear, certain and unqualified, and he urged his readers to buy all they could in wine futures, the Bordeaux system in which you pay now for wine that will be delivered in a year or two, gambling that prices will go up and availability down.  The result was feverish excitement and a frenzied market that reached beyond professionals and connoisseurs to a new group of buyers in it for the curiosity, status and investment possibilities. 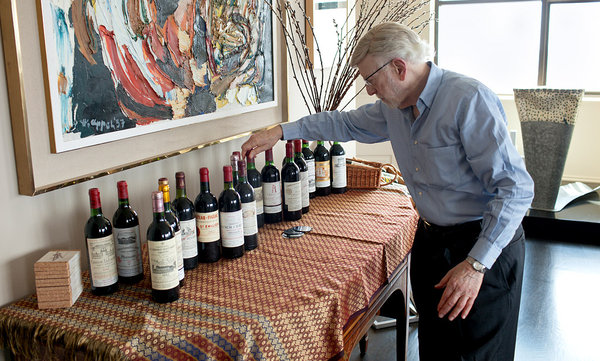 Mark Taylor, a Bordeaux collector in Atlanta, opened some of his 1982s for a tasting. Photo: Raymond McCrea Jones for The NYT

Simultaneously, the Bordeaux business itself was changing.  Back then, many leading chateaus were still owned by families rather than by the corporations and wealthy individuals who dominate Bordeaux today.  The business was far less glorified than it is now, and after several difficult decades and a sharp increase in French inheritance taxes, many families sold off their holdings.

New ownership and the brisk sales of the ’82s brought an infusion of cash into Bordeaux, inaugurating an evolution over the next 20 years into the modern Bordeaux of today.  The 1982 Bordeaux were rich, ripe, opulent wines, reflecting the year’s long, hot and dry growing season.  The popularity of the wines understandably gave producers an incentive to want to make similar wines in the future, which, beyond hoping for a similarly ideal year, required altering their methods.

In a sense, 1982 validated what Bordeaux enologists like Émile Peynaud had long been preaching.  For years, he had recommended to Bordeaux producers that they should not harvest grapes early to prevent rot but allow the grapes to ripen fully.  He urged winemakers to select only their best grapes for their wines, a difficult notion for many to accept at a time when quantity was often more important than quality.  In fact, yields in ’82 were high.  They would have to come down if growers wanted to achieve better wines more consistently, even in less-than-perfect years.

Rather than put all their grapes into one wine, Dr. Peynaud urged wineries to create less expensive labels for grapes that were less than the best.  In 1982 few chateaus had second labels.  Now it’s standard procedure.  In myriad other ways over the next 20 years, Bordeaux chateaus transformed their viticulture and production methods, adding technology, gaining control over nature, reducing the element of seasonal chance.  Global warming made it easier for growers, or at least less difficult, to pursue the lush style of ’82.

In the first decade alone of the 21st century, Mr. Parker himself has already proclaimed three vintages of the century.  A global market developed and prices have skyrocketed.  Great Bordeaux today is no longer merely a wine but a luxury good, priced well beyond the means of most consumers.  For better or worse, it’s an unintended consequence of a transformation that began with the ’82 vintage.

The one question that did arise about the ’82 vintage was whether the wines would age well.  Mr. Parker never doubted, but others suggested the wines from this hot vintage lacked the structure for the long haul.  Well, here we were, 30 years later in Mr. Taylor’s apartment, about to find out.  Among the wine lovers at the table were several professionals, including Charles Curtis, head of wine sales in Asia for Christie’s; Eric LeVine, founder of CellarTracker, an online cellar management tool; and Yves Durand, a sommelier, author and Atlanta wine personality.  Almost all the wines came from Mr. Taylor’s cellar, where they had been since release. 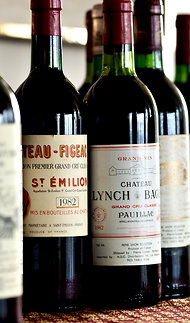 Raymond McCrea Jones for The NYT

Mr. Durand had arranged the wines in a series of three flights.  While we were told the six wines that made up each flight, they were served blind.  The first included five from the Médoc and Pessac-Léognan: La Mission Haut-Brion, Pichon Lalande, Gruaud-Larose, Beychevelle and Lynch-Bages, and one outlier, Figeac from St.-Émilion, perhaps the most Médocian of St.-Émilions because of the high percentage of cabernet sauvignon in the blend.

The wines were lovely, though in such circumstances one can’t help being critical.  My favorites included the Beychevelle, a complete, complex and harmonious wine that was both contemplative and surprisingly rich, and the Pichon Lalande, still youthful and impossibly delicate for such a full-bodied wine.  The Figeac was not hard to identify: it had a spiciness to the aromas and flavors that clearly set it apart.  La Mission was disappointing.  Though fresh, it did seem to lack structure.

The second flight included the five first growths — Lafite-Rothschild, Mouton Rothschild, Latour, Margaux and Haut-Brion — along with Cheval Blanc, their St.-Émilion equivalent.  This flight was simply brilliant.  One might quibble with the wines comparing one to another, but each was no less than splendid. We resisted the urge to rank these wines — “How do you rank greatness?” somebody asked.  But we did have a consensus favorite, the Margaux, a beautiful ruby color with complex fruit, mineral and tobacco flavors.  The Haut-Brion seemed bigger and more opulent, with exotic fruit flavors and a strong tobacco-like aroma.

The Lafite seemed fuller and richer than the Mouton, which seemed to have more finesse.  Strange, I would have thought it would be the other way around.  The Latour stood out for its purity and powerful tannins, while the Cheval Blanc, with time in the glass, developed a cedary quality that is often its telltale giveaway.  All in all, a remarkable set of wines.

The third flight, with the unenviable task of following those sublime wines, included two St.-Juliens: Ducru-Beaucaillou and Léoville-Las-Cases; plus Cos d’Estournel from St.-Estèphe and three Pomerols — Lafleur, Le Gay and L’Évangile.  This flight was more erratic.  The Léoville was corked and a second bottle was a tad musty.  My favorites included the youthful, harmonious Cos d’Estournel and the complex, rich yet earthy L’Évangile.  The Ducru was pretty, but I was disappointed with the Lafleur, which was sweet and jammy.  Of the 16 ’82 Bordeaux, it was the one bottle that I would have had difficulty finishing.  Of course, that’s one man’s opinion. Mr. Durand loved the Lafleur.

It’s not easy to sum up such an extraordinary set of wines.  I was privileged to have had the opportunity to drink them, especially as so few wine lovers will have a similar opportunity to taste more recent great vintages.

Nowadays, so many of these wines are bought as trophies or investments.  It will be the rare buyer who, like Mr. Taylor, can afford to pull the corks and drink them.  The ’82 vintage leaves a beautiful legacy, but that fact is bittersweet.