As Tastes Change in Harlem, Old-Look Liquor Store Stirs a Fight.
Some affluent residents of a gentrified section of Harlem would prefer a trendy shop that offers high-priced wines. Many neighbors agree that their genteel enclave of brownstones in the heart of Harlem does need a shop where they can pick up, say, a good cabernet for a dinner party.
But the liquor store seeking to open on Lenox Avenue near 119th Street is decidedly not what they have in mind.

With its roll-down steel gate, its bulletproof plexiglass to guard against robbers and drunken vagrants, and its flamboyant red-and-yellow sign, the store is a throwback to the old crime-ridden, ramshackle Harlem, some neighbors say, not the reborn Harlem they have been advancing during the past decade.  “We want to be Park Slope with charming little stores and become a destination for people,” said Ruthann Richert, a 25-year resident who is treasurer of a local group, the Mount Morris Park Community Improvement Association.  “A store like that is going to attract the people hanging out, drinking wine, so if you’re looking to buy a $30 bottle of wine, you’re not going to go in there.”Laurent Delly, a Haitian-born engineer and real estate agent who is the association’s vice president, was especially unhappy with the sign.  “I wouldn’t use the word ghetto, but I would say it’s garish,” he said.

The association has gotten the city’s Department of Buildings to stop construction work at the liquor store, mostly because the owner did not get permission from the Landmarks Preservation Commission to change the appearance of the building, in what is designated the Mount Morris Park Historic District.

Berihu Mesfin, the owner of the liquor store, said his landlord had authorized the sign, which he said was similar to that of a beauty parlor that had been in the same space. He also said he had been advised to get plexiglass barriers for security.  He said he was willing to make some changes to placate neighbors, but noted that he had already spent $3,500 on signage.  “It’s expensive,” he said.  “I have to talk to management.”

The advent of the liquor store has crystallized the tensions that flow from a neighborhood in metamorphosis.  Almost every brownstone that in the 1980s was abandoned or city-owned is now fetching a price of $3 million, with individual condominiums going for $1 million.  Residents include the poet Maya Angelou and the documentary filmmaker Albert Maysles.

Cafes, cheerful flower and toy shops, and fine restaurants like Settepani, where former President Bill Clinton had a birthday party, are taking over once-forlorn spaces.  Crime in the 28th Precinct, which includes the area, has dropped by 70 percent in less than two decades, with 6 murders in 2010, compared with 41 in 1990.  The ambiance is Bloomsbury-like, calm and demure.
But what residents call the second Harlem Renaissance has made the neighborhood less congenial for poorer residents who may want a cheap liquor store, a bodega that accepts food stamps or a place to cash welfare checks.

“I don’t see a problem with liquor,” said Rooster Pickering, a 65-year-old unemployed construction worker who was idling with three other men on a stoop next to the liquor store.  “The smaller people, they’re trying to push them out.”  One woman who lives in a brownstone and who asked not to be identified said she worried that the campaign against the liquor store might take on an “elitist tone.”

Yet others argue that they have won the right to push for a more decorous neighborhood, having been pioneers when much of the area was in tatters and plagued by crack cocaine and violence.

“I feel I’ve earned my stripes,” said Leah Abraham, an Ethiopian immigrant who opened Settepani with her husband, Nino Settepani, 10 years ago and moved into a Harlem brownstone five years ago.  “I was held up at gunpoint twice. I strongly believe I’m doing good in the community. Everybody wants the best.”

The struggle sometimes has a racial and class edge because gentrification has attracted an influx of white and black professionals and an outflow of poorer blacks.  The historic district stretches over 16 blocks from West 118th Street to 124th Street, roughly taking in the west side of Lenox Avenue almost to Fifth Avenue.  Its collection of Gilded Age town houses and Romanesque Revival churches is regarded as among the city’s grandest (the park itself was renamed Marcus Garvey Park in 1973 after the Jamaica-born black nationalist leader).

When Ms. Richert moved to Harlem in 1987, many of the buildings were boarded up, and she remembers kicking crack vials aside while walking with her two children.

All that changed with increasing investments and the steady stream of newcomers glad to pick up handsome brownstones for $250,000.  The invigorated Mount Morris Park neighborhood became a draw for sightseeing buses and movie locations.  With its wide sidewalks, Lenox Avenue, also known as Malcolm X Boulevard, was once again thought of as “our Champs-Elysées,” Mr. Delly said.

Lenox Avenue still has ragged grocery stores, but members of the association view the liquor store as a brash newcomer that must obey the new unwritten rules.  “It’s not the business we disagree with, it’s the aesthetics,” Ms. Richert said.  Ms. Abraham said the liquor store owner thought he was doing good in opening the store.  “I don’t begrudge him that,” she said. “But he didn’t study the neighborhood. You could get away with this 20 years ago. You can’t today.” 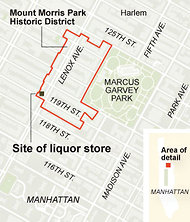 A version of this article appeared in print on December 2, 2011, on page A29 of the New York ToDay edition with the headline: As Tastes Change in Harlem, Old-Look Liquor Store Stirs a Fight.