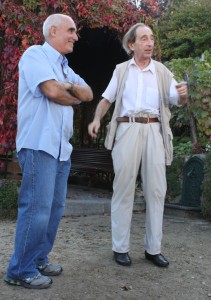 Originally from the south, Francis Gourdin has been the official Paris City oenologist for 30 years, and is therefore responsible for the tiny cult vineyard, Le Clos Montmartre, on the north side of the hill just under the monstrous Sacré-Coeur Basilica built during the architecturally-challenged late nineteenth century.

Raymond Lansoy is a local author from just up the road who looks just like a Montmartre author should.  Let’s just say that he looked as if he’d slept in his clothes.  His grandfather frequented the adjacent Lapin Agile singalong bistro which was also popular with Picasso and the other usual suspects.

Back then when Picasso was hanging around, the authorities wanted to plonk a building on the plot, a good hundred metres across.  That project failed and it became a children’s playground instead.  The artists over the road worried that another project was inevitable, brought in a vigneron they knew from the Beaujolais.

Most of the vines are hybrids of the kind now banned in Europe and a few gamays and pinots.  The soil is a mix of rough limestone and gypsum from which plaster of Paris was made until the buildings started to subside into the holes left by the mining. Since then, the area has been pumped full of cement. 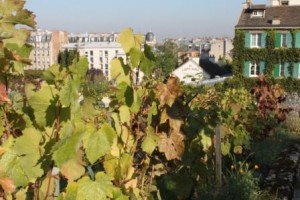 Clos Montmartre with the Lapin Agile behind

Perhaps sensing that were wondering why the hybrids hadn’t been replaced, Gourdin explained that they give the wine its Montmartre character: harsh, aggressive, metallic and acid. “I have tried to modify that a bit,” he conceded.  “But it is complicated.”

The grapes from all but several plants had been harvested, and were now a proto-wine we would taste later.  The remaining grapes will be picked by officials this weekend at the annual festivities which follow the holiday of St Denis.  That’s right, Dionysus in Greek.

Not that Denis (the Saint) is known for his tippling.  He is best known for his head. Denis was the Bishop of Paris, which was not very sensible at the time, as the Romans put him on trial and sentenced him to a beheading on the summit of the Mount of the Martyrs.  So off they headed to the hill, but the soldiers got tired of it all and decapitated him on the lower slopes.  Naturally enough, Denis was not at all happy about this, so he picked up his head and walked with it to the top in order to expire there in accordance with the judgment.

When he got there, though, he saw a pleasant spot several kilometres north and walked over there, to finally kick the bucket where his Basilica now sits in the midst of a grimy suburb which bears his name. 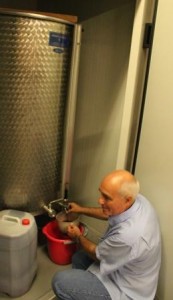 Back to the present.  Leaving the vines, we strutted down to the local (18th arrondissement) Town Hall. Without authority, apparently, but with Gourdin’s key, we slipped downstairs to see his cellar.  Fermentation of this year’s vintage had just finished and the wine was now settling in a 600 litre stainless steel vat.  He warned us before we sipped it, and he was right to do so.  The nose was not unlike the drains in Jakarta, even though it was not as bad to taste.  “The aroma comes from the grape variety,” he said, “and the acidity from the terroir.”

We then tasted from bottle 00083 of the Clos Montmartre 2006 vintage, credible and well made with a pleasant light fruity nose.  The 2008 was cleaner, a little like a simple pinot from the very north of Burgundy.

At €40 a 50cl bottle, these are not value-for-money wines, and they are not meant to be.  Sold for charity, they are collectors’ items.  To adopt the immortal words of Monty Python, they are for laying down and avoiding. 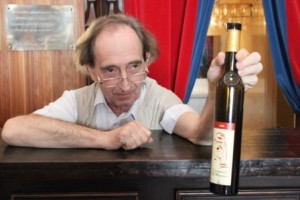 Raymond Lansoy at the Commanderie

From the 18th Mairie we scrambled through the Tourist Black Hole of central Montmartre to other vines at the old reservoir on the southern side of the hill.  We were received diffidently by the Commanderie du Clos Montmartre who make 80 bottles of their drop from a few strands of wines.

Gourdin had left us by now, so Lansoy was able to express a preference for these bottles.  Incidentally, I doff my cap at Gourdin, who makes wine from crap vines that face north in a place that’s already too cold.

To top it all off, we dined at Le Chamarré back up past the Clos.  Great food, but eyebrow-launching mark-ups on the wine.  We contented ourselves with a simple Anjou rouge from the Domaine Montgilet, which was better than pouring a week’s salary down our throats over Sunday lunch.