Serving some wines by the glass straight from the barrel has long been a practice in Europe, and it slowly began catching on in California seven or eight years ago.
In NYC, Daniel Boulud’s downtown outpost, DBGB, and City Winery, which opened in 2009, also pour wines on tap. 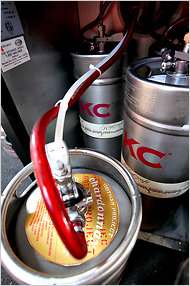 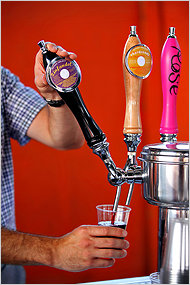 But at a growing number of restaurants, many of them trendy locavore spots known as much for their cutting-edge attitudes as for their culinary prowess, the draft wine comes from Gotham, which was founded in 2010. Gotham installed its first tap, dispensing riesling, at Terroir Tribeca when it opened in April 2010.
The benefits, according to the Gotham Project founders Mr. Bieler and Mr. Schneider, include freshness, eco-friendliness and convenience.  Besides, the idea of wine from a keg of cool — and the moment just felt right.

Below, Charles Bieler (above foreground) and Bruce Schneider the Gotham Project founders, check some of their wine kegs at the Lot on Tap, an outdoor bar in Manhattan. They say the kegs are not just a gimmick — they are dedicated to changing the way Americans drink wine: « We’re not just selling a concept, we’re selling a better glass of wine«  Mr. Beier adds. 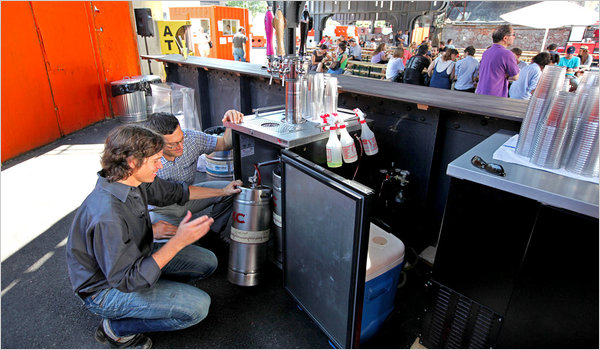 The Gotham Project places special emphasis on wines from the Finger Lake region and the North Folk of Long Island (though it also sells imported varieties), and most of its wines which are sold by the glass, are in the $8-to-$10 range. Among the other places dispensing wine from its stainless steel casks are Marcus Samuelsson’s new hot spot, Red Rooster in Harlem; the Lot on Tap, an outdoor bar below the High Line on the West Side of Manhattan ; and Terrance Brennan’s cheese-focused Artisanal.

The magazine Food & Wine chose the Gotham Project as one of its Best Wine Trends of 2010, and named Mr. Bieler one of the “40 Big Food Thinkers Under 40.”

“I wanted to do something locally,” said Mr. Bieler, 36, explaining the start of his collaboration with Mr. Schneider in the Gotham Project. “I was always amazed by the trend of eating local, but when it came to drinking local, people sort of ignored it.”

Carla Rzeszewski, the wine director at the Breslin and the John Dory Oyster Bar — both co-owned by the celebrity chef April Bloomfield — said keg wines helped create a more casual and communal atmosphere. She likened it to buying a pitcher of beer at a dive bar, where “everyone immediately becomes part of the ceremony of the pitcher.”

Not all wine is meant to be put on tap. Ms. Rzeszewski said she would never dream of offering, say, a grand cru on draft. But a 2010 Finger Lakes riesling?

“I think there are certain wines that are beautiful on tap,” Ms. Rzeszewski said. “It’s this perfect yummy, yummy, yummy spring rosé, chilled, coming out of the tap.”

Mr. Bieler and Mr. Schneider are natural ambassadors for wine in kegs. Mr. Schneider is the grandson of a bootlegger and the son of a wine and spirits importer and distributor. Since 1994, he has made wines, in bottles, with grapes from the North Fork, specializing in cabernet franc, and for a time he owned a vineyard as well.

Mr. Bieler’s father bought a château in Provence in 1992 and started making rosé.  When Mr. Bieler was in college, his father asked for help in marketing the wine, so Mr. Bieler bought a 1965 Cadillac de Ville, painted it pink and set off across the country for two years promoting it.

Now, Mr. Bieler and Mr. Schneider are oenological jacks-of-all-trades.  Not only do they produce some of their own wine, but they have also been known to head behind the bar with a tool kit when some part of a restaurant’s keg system is not working quite right.

Standing in the bar of the Breslin one afternoon, Mr. Bieler, wearing blue jeans and a gray button-down, and Mr. Schneider, in glasses and a plaid shirt tucked into khakis, were the very picture of the customers they hope to draw.

“I think this sort of environment is the picture of where we’re most well suited,” Mr. Bieler said, gesturing to the buzzing lunchtime crowd.  “It tends to be younger, it’s hip, it’s people who are more thoughtful about their food and drink. It tastes good, but it’s not elite or expensive.”