Rising temperatures across the winemaking regions of the world are having a profound impact on taste and quality.  Across the world viticulturalists are being forced to adapt climate change. In some cases the shifting weather patterns, combined with higher incidents of extreme events, are contributing to a change in taste, style and character of the wine.  While this can be bad news for some wine regions, it can be good for others. Take France in 2009, where the weather conspired to produce wines, across the country, of exceptional quality.

In the faculty of oenology at Bordeaux’s Institute of Vineyard and Wine Sciences the vintage report showed that the growing season met almost perfectly all the conditions for a great Bordeaux vintage.  Some vignerons talked about it as a year without comparison, others of how in 2009 they had made the best wine in their lifetimes.  In Burgundy, the red wines were exceptionally ripe, forward and low in tannin.  In Beaujolais, people talked of the most outstanding vintage for 50 years.  Master of Wine, Jasper Morris, described Beaujolais 2009 as luscious, perhaps even as good as the legendary 1959.  In Germany, there was widespread euphoria over the quality of the grapes harvested.  Critics were united in their praise.  In the northern hemisphere, 2009 had been an exceptional year. 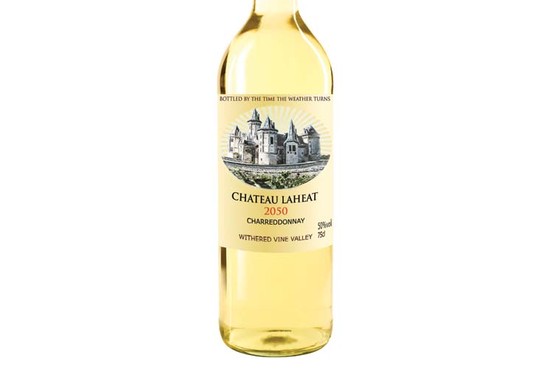 Then came 2010.  A year that Bill Blatch, author of the annual Bordeaux vintage report, described as one where globally the « weather went crazy ».  Gregory V. Jones, from the department of environmental studies at Southern Oregon University in the U.S., says that globally 2010 was the warmest year on record for the northern hemisphere and the sixth warmest year on record for the southern hemisphere.  In March, he told delegates at the third world conference on climate change and wine in Marbella, Spain: « In 2010, Eastern Australia saw the prolonged 10 year drought broken but it has ushered in one of the wettest years, bringing floods and heavy disease pressure. Meanwhile, Western Australia has experienced one of the hottest and driest summers on record. »

In Europe, wine regions experienced record-breaking cold weather in December and January, followed by record-breaking heat during June and July, Prof. Jones told the conference.  Furthermore, in October 2009, the western U.S. experienced one of the earliest freezes on record when fruit was still on the vine.  This was followed by one of the warmest winters on record, followed by one of the coolest springs in 60 years.  The picture, Prof. Jones told delegates, is very variable. « Model updates show that by 2050 [temperature] in wine regions will have risen globally by between 1 degree Celsius and 5 degrees Celsius with the best estimate at 1.5 degrees Celsius to 2.5 degrees Celsius. »  It is a view echoed by consultant oenologist Riccardo Cotarella of the University of Viterbo, who quotes data from the Association Viticole Champenoise General Convention, which shows that the temperature average for the period April to September recorded in Reims and Epernay in France has risen from 14.5 degrees Celsius in 1980-1989 to 15.8 degrees Celsius in 2000-2001.

He says that since 1990 there have been profound changes in the climate with an increase in extreme events such as heavy rains, flooding, strong winds, heat waves and droughts.  Speak to winemakers and the picture is more cautious.  Some argue that vintages have always changed, the weather is cyclical and wine styles have historically been forced to adapt.  « I have no idea whether it (climate change) is real or not, » says Hélène Garcin, winemaker at Bordeaux’s Clos L’Eglise estate. « We’ve had some hot years, we’ve had some cold years, we’ve had years with very high humidity. I think it has always been like that. »  Whether the change in climate is part of a long term weather cycle or manmade is still open to debate.  Prof. Jones himself admits that the narrow climate zones for growing wine grapes « are especially prone to variations in climate and long-term climate change« . But what is clear is that wine regions in the northern and southern hemisphere are experiencing a change in the weather and the style and character of wines are being affected.

« I don’t argue any longer, » says Richard Grünewald, winemaker at Weingut Grünewald & Schnell in Germany’s Rheinhessen region, who says that climate change is a major concern for his business.  « We have data from the federal state institute (Dienstleistungszentrum Ländlicher Raum) that have records going back to the 1960s which show that the average temperature has risen and blooming is occurring earlier. »  Mr.Grünewald says that climate change has affected the ripening profile of the grapes and has speeded up the growing season, which in turn has altered the style and character of his wine.  His wines now have more flavor, less acidity, more density, sugar and alcohol.  He believes that in the short-term his region has profited because the growing season has expanded and the threat of frost has diminished.  « We do not have the very cold temperatures during the vegetation period which can cause damage to the vineyards. For many years we wanted grapes that would ripen as early as possible, but now we are planting grapes that ripen a bit later. We are famous here in Germany for Riesling. It is a cool climate grape and the plant profits from warm days but we also need cool evenings. We fear that if the temperature continues to increase it is no longer a cool climate region and perhaps in 50 years Riesling could be difficult to grow, » Mr. Grünewald says.

If the cool climate regions of Germany and Southern England are benefiting in the short-term, other regions in the southern hemisphere like California and parts of Australia are experiencing challenges such as water scarcity, an increase in temperature and the increase of extreme weather events, most notably flooding and bush fires.  Prof. Gregory says that it only takes a 1 degree Celsius increase in temperature to affect substantially the ripening of certain varieties.  If the grape is planted in a warmer region this could result in some varieties becoming unviable.  The possible consequences of climate change on viticulture include early harvests, fall in values of total acidity and an increase in sugar content, which in turn means a rise in alcohol levels.

The solution lies in flexibility.  Mr. Cotarella suggests there are a number of winemaking practices, such as temperature controlled fermentation and rapid delivery of grapes to the winery, which can help preserve the aromas and flavor compounds of the varieties. Another option is to plant different grape varieties that can handle the heat or, in the case of Southern France or Spain, to plant at an altitude where the temperature is significantly cooler. « In 2004 we started to plant Cabernet Sauvignon, » says Mr.Grünewald.  « My father told me: ‘Hey son it won’t work,’ because his experience told him that that grape needed a longer ripening period, but nowadays it works. We have also started to plant Chardonnay as they are the type of grapes that like a warm climate. » Meanwhile, back in Bordeaux, barrel samples of the 2010 vintage have just been shown to the world’s critics.  It was a year that produced red wines with record levels of tannin, acidity and alcohol.  A year some winemakers described as nature’s challenge. 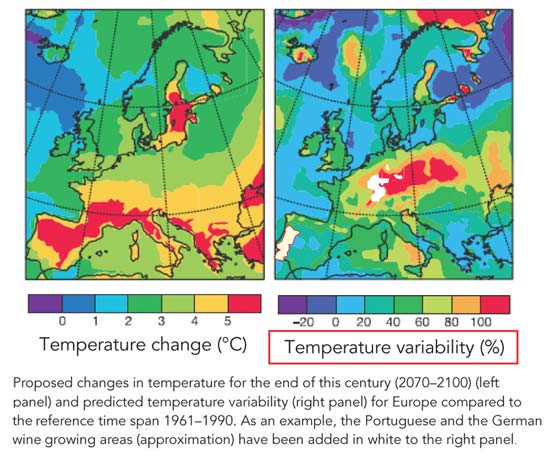 Mr. Lyons is the wine correspondent for The Wall Street Journal Europe. He can be reached at william.lyons@wsj.com.