CHILEAN MINERS CELEBRATE WITH A GLASS OF WINE

On Saturday, October 23, the embassy of Chile in Madrid celebrated 200 years of independence. The emotional highlight of the event was the participation of four of the recently rescued Chilean miners accompanied by their relatives, one of whom was a daughter born while her father was trapped below ground.

The event, organized by The Wine Academy of Spain and conducted by Pancho Campo MW, featured a tasting of six of Chile’s icon wines and a demonstration of Chilean gastronomy by chefs Andrés Madrigal and Carlos Pascal.  These events were followed by the performance of one of Chile´s most legendary traditional music groups, ‘Los Huasos Quincheros’.

During the bicentennial celebrations these reknown men shared a glass of wine with The Wine Academy of Spain‘s director Pancho Campo. The event, held at Madrid’s ‘Museo de America’, was attended by approximately 200 diplomats, dignitaries, politicians, and media. 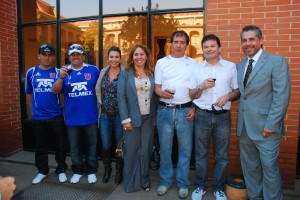