FROM PARIS AND THE WINE FAUNA UP THERE

As if the French wine world weren’t lively enough, many of France’s beautiful wine people met up in Paris last Thursday for the inaugural Autrement Vin expo. 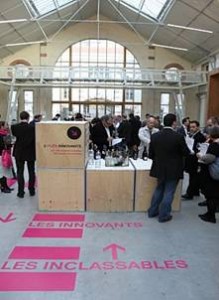 The French have many ways of expressing their creativity.
Sitting around in cafes reading Le Monde Diplomatique, wearing a colour other than black along the Boulevard St Germain, leaving the Vientiane tag on your backpack, and so on.  But the best way of all is to bend rules in a nifty way.  This is a particularly fertile field, as France seems to make more rules than cheese.

— The unclassifiables include makers of wines that fail the typicity test for their area or derive from unauthorized varieties and have to be sold as Table wine.  These included a Zinfandel from the Languedoc, a Beaujolais made like a highly-extracted Burgundy and a Bordeaux Malbec also produced in the Burgundy way.

— The innovators include a late-picked champagne without added sugar, an expensive age-worthy rosé with a structure like a top white Burgundy and a St Emilion (where Merlot is king) made mainly of cabernet and fermented in gently rotating oak barrels.

— Among the forgotten are almost-lost varieties and vines grown without grafting.

— The sustainables bring together winemakers who care for the environment, including several biodynamists.

Predictably enough, a debate between leading French critic Michel Bettane and winemaker Marcel Richaud from Cairanne, degenerated admirably into a French gabfest as soon as the first question was asked.  I mean, the Australians would have used the opportunity to talk about marketing opportunities, for God’s sake!  These folk, reflecting the pathological relationship between the French citizen and bureaucrats who are supposed to protect them (traditionally against the perfidious Anglo-Saxons and these days, too, against the wily Chinese) but whose incompetence is definitional, simply tore into the system.  Everyone seemed to agree that rules are essential to protect their reputations, but need to be loose enough to allow them to do whatever they want.

If winemakers generally have strong characters, these rule-benders were particularly picturesque and were itching for the chance for a good chin wag.  The old-style wine journalists and the rapidly expanding community of bloggers who attended were also the sort of personalities you’d expect to see in significant money-losing films in which the knife waving is done at the table rather than in the street. Indeed, uber blogger Jacques Berthomeau (left, with winemaker Marcel Richaud (center) and wine critic Michel Bettane (right), manager-oenologist Sophie Pallas, oenologist-journalist Myriam Huet and Gault & Millau‘s Pierre Guigui held it all together with endearing panache and would have been perfect in any film requiring a pair of dapper intellectuals.  And our own Daniel J. Berger swept around in a mustard yellow coat looking every bit the wine sleuth.
The wines were mostly good to excellent, the discussions enthralling, and it was endearing to see the who’s who of French wine writing all together in the same place being meaningful.

The gig was run by L’Agence Vinifera from Toulouse, and all power to them, too.