ARE YOU OUT OF YOUR MIND? GARY ASKED

By DANIEL J. BERGER from the Winefuture-Rioja ’09 conference in Logroño, Nov. 12 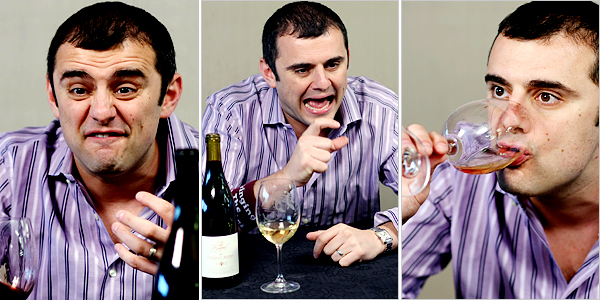 It is the question that the Belarus born Internet wunderkind and creator-owner of The Wine Library website, Gary Vaynerchuk (pictures above from the NYT), asked an audience of around 1,000 wine professionals, gathered in the middle of La Rioja to hear well-known speakers on a wide range of subjects (see previous post): « Do you think you can plan on being in business and not recognise the rise of social media technology — blogs and Internet clips, Facebook and Twitter, and the impact of online conversations between consumers on the wine world ?”

Gary Vaynerchuck is producing one wine clip almost every day on his Wine Library TV. Have a look (nearly 800 episodes archived). His site aims primarily at selling wines and it has a daily e-mail service. He also wrote a best-selling book: Crush It.

Walking briskly from one side of the stage to the other, Gary spoke clearly enough : “The world is changing very fast and what nobody could have imagined is that cell phone technology or social networks such as Facebook and Twitter would be our basis for growth. I can now talk and be recorded and watched by millions of people at the same time, and the same if I drink wine. This is the key contribution of today’s technologies.”

He asked how many people in the room were actually using Facebook or Twitter or any kind of connection to reach customers, and seemed dismayed at how few responded. “Every person in this room, regardless of your financial status, can use it to build brand equity.  The Internet has levelled the playing field.  You should be embarrassed if you don’t recognize the low cost of this platform.”

Gary argued that, given the speed with which individual consumers can pass information through social media, most producers are only one tasting away from a failure or a success. He called it “living in a word-of-mouth economy” where consumers will no longer be sold to, but will want to connect  with brands they are really interested in.

He said he personally answers a thousand e-mails a day and has been able yet to build a « huge and loyal customer base.  I urge you all to reallocate your time and resources to social networking. Invest in somebody in-house to do this and your business will explode.”

At the closing, Robert Parker added  : “The economy is a challenge that we need to overcome, but we also need to acknowledge that the industry continues to be a dinosaur in its relations with the Internet. The key lies in interacting with customers. Every winery needs an interactive website to promote its image. It’s like someone walking down the street in Tokyo and feeling like a glass of Rioja. Where can he find it? That’s what you have to achieve.”

Gary Vaynerchuk was the real sensation of the Winefuture-Rioja ’09, his performance on stage was exciting and his impact on the audience was convincing to work harder with the Internet. The emerging theme during the congress was that the world has fundamentally altered – while most of the wine trade was asleep. Gary woke up a part of it for a good half an hour there.