HONG KONG, THE CITY WHERE ANYTHING WORKS, WHATEVER 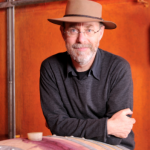 Coming from the West, you might not realize that Happy Valley is a particularly wealthy part of the Island. On steep sidestreets, car repairers and metal workshops spill onto the roughly finished, cracked concrete sidewalk. Trucks double park as bare-chested labourers unload kitchen components. The sound of jack hammers, cranes and diesel engines is constant. The windows are aluminium, the aircons leak.

Bensons Crab and Wine store, Established 1999, is crammed between a bakery and a dry cleaning shop. At a low table just outside the door, a sun-darkened fellow is tying live Shanghai crabs up with raffia.

I push the door open and shiver. Just as well, as crates of wine are piles almost up to the roof. The Hong Kong faves are all here: Lynch-Bages, Lascombes, Palmer, Pichon Longueville. The Bordeaux first growths are in a fridge.

I work my way to the counter at the back and introduce myself to the lady at the counter. “I haven’t much time,” she says, as she hands a telephone card to a young Filipina in a NO MONEY NO HONEY t-shirt. She waves with the back of her hand at the cases on the floor.

“That’s everyday drinking for the people around here.”

“And the stuff in the fridge?”
“That, too. They fly out the door, they’re our most popular bottles. But more for special occasions, to celebrate, impress the boss, that sort of thing.”
“Um, what’s going on here?”
“Well, the focus of the world has changed. The money, it all happens here now.”
“Do you have anything from the Rhône?”
“No call for it.”

She turns back to her constant stream of Filipinas, and I look around some more.  From Australia there are Granges of several vintages and Runrigs at the equivalent of 200€ a bottle.  A few simple McLaren vales are selling for around 20€.

“Goodbye,” I say.  She doesn’t look up.  Some of the stores along the road towards the Post Office are only a metre and a half wide.  A Starbucks faces a Pacific Coffee Company across a side street; in each a smattering of westerners sits transfixed into their computers.  The local 7-11 is selling Yellowtail, Jacob’s Creek, Gallo and Mouton Cadet for around 100HKD a bottle, 9€. Even at that price…

Later that day I do my best to float into the Marriot Hotel with a friend. It’s happy hour at the Q88 wine bar. A couple of Chablis and New Zealand Chardonnays later and it’s even easier to float around.  The door of a private room is open as we leave.  There’s no-one in it, but the punters must still be around, as Italian jackets and handbags are strewn on the leather sofas.  A half-finished Krug sits on its ice.  The decor is driven by marble and bling and is indescribable, so here is a picture instead. 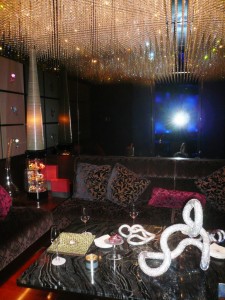 Hong Kong. Where wine is a commodity, something on the floor among the crabs, or is drunk with diamonds.
Whatever works.