SHOCK DOWN UNDER: WILL THEY TURN INTO TERROIRISTS? 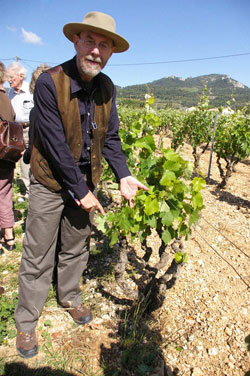 It’s not just the crisis. Oversupply of grapes has held down prices, and quality was affected by heatwaves and drought.
The Aussies are also suffering from their image as makers of easy drinking, predictable plummy varietal wines.
Some are even talking up the glories of their soils. Having sneered at it for years, are they now going to use the dreaded “T” word?

Meanwhile, I have been judging for the Wine Producers Association for the northern Greekvineyard in Thessaloniki…

Although the Greeks have been making wine for quite a while — they introduced it to the French in the Rhône valley several centuries before Christ did his trick at the Cana wedding feast — they have only just started making fine wine again.

Modern Greek tipplers prefer international varieties to Greek ones, which is fine if their winemakers are not exporting. But who outside of Greece would be interested in Greek Merlot?  No, they have to promote their own grape varieties, many of which are very exciting.

But watch out! If they go the Aussie route and push varieties at the cost of « location », they will dig themselves into a similar hole.  The Aussies spent millions pushing the message that, essentially, you can make good wine anywhere with the right technology.  They may now have to spend even more convincing the world that, er, well yes: they do have great terroir (which they do!).

The Greeks can avoid that trap.  After all, unlike the Aussies, they have their own varieties like Xinomavro and Assyrtico, which come from clearly defined regions.  And regional names might be a lot easier for overseas consumers to pronounce than the grape name.

I may be sounding French, but it’s the only way to go!