Here is a short note about the vineyard of Masciarelli in Semivicoli in Abruzzo (see previous article by Patrick du Génestoux) 50 miles east of Rome now owned by Marina Cvetic after her husband’s sudden death last summer. 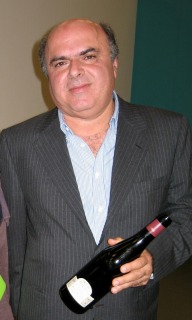 Gianni Masciarelli (left) was one of Italy’s finest winemakers and he has done much to improve Abruzzo’s wines. In 2004 he purchased the ancient baronial palace and undertook a careful restoration until he suddenly died last summer at 53. Stone, wood, iron have resisted time. Tasteful modern touches add to the uniqueness of the building rooms and furniture. Gianni had decided to open the place for wine and food seminars, concerts and events. In 2009 the 12 rooms and suites provide guests with a top quality level. He was also a shrewd businessman and succeeded in under two decades in doing what others have failed to achieve in over two centuries.

Semivicoli nests on a sublime landscape not far from the picturesque city of Guardiagrele, as if one could touch the perennially snow-capped pinnacles of the Majella. The sea is some 10 km away and can be seen from the hills as well as the Gran Sasso mountains.
The palace rises on a hill between the Foro river and the Dendalo torrent in the province of Chieti. Built during the 17th and 18th centuries, it was owned by the Baron Perticone. It is still boasting a functional oil mill from 1836 and a cellar with huge chestnut casks from the 19th century.