GREECE, ITS WINE AND THE CRISIS!

I know that a lot of friends have been very much concerned about the vicious way in which the global financial crisis has impacted Greece, and the repercussions on Greek wine as a result.

So I will take this opportunity to put everyone’s mind at ease, starting by saying that, as every cloud has a silver lining, I strongly believe that the crisis will benefit Greek wine, at least in the long run.

Let me explain: when all the fuss about the crisis erupted — and, as you’d expect, it was grossly exaggerated by the mass media — most people initially felt very insecure and uncertain about the future.  Even hardcore oenophiles refrained from going out, attending wine tastings and events, and in general enjoying their life as before.

I’m happy to report, however, that things are nowhere near like this nowadays.
I’m not saying that they are back to their pre-crisis normal — and they shouldn’t be.  But what we’re now seeing is a positive turn towards efficiency and value, which are notions that —admittedly— we didn’t use to pay too much attention to before.

In the wine business the situation is serious but, I believe, ultimately promising.
There have been plenty of rumours about retailers and wholesalers being in financial trouble, while there have even been a few closures and forced take-overs.  On the other hand, the majority of the businesses in the sector are now more sensitive to the needs of the consumer, and they know that they have to offer true value for money, even if it means lower profit margins.

It is a widely held belief that true professionals will survive and eventually prosper — and this is vital, in a market that has historically been very badly managed and almost totally unregulated. In addition, based on indications so far, I truly believe that (a big chunk of) the future belongs to wine sales over the Internet.  That can only be good news, as it will hopefully contribute to the evolution of a healthier, more open and competitive market in the future. 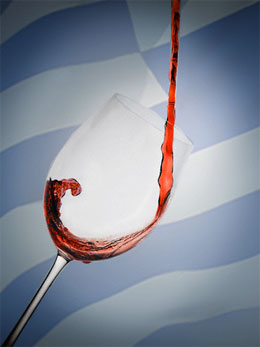 For wine-lovers, the crisis so far seems to be leading to new, unchartered, but certainly beneficial paths.

People may be eating out less, but they certainly get together more.  Financial hardship seems to be fostering creativity and togetherness, so people organize dinners at home more than ever before, with wine taking the centre stage.

When they do go out, they are more vigilant than ever in identifying (and promoting) businesses such as retail outlets and restaurants that sell wine at a reasonable price, while they are much more prepared to penalize those who continue to charge unreasonably, hoping for a quick buck.

Finally, even though the Greek restaurant scene, at least in the major urban areas, was never geared towards BYOB, this now seems to be becoming a silent practice amongst a growing number of restaurants and tavernas, whose owners not only don’t resist it, but are even happy to not charge corkage.

Abroad, Greek wine seems to be doing even better.
International interest in our native varieties continues to be high, while more and more major markets in North America, Asia-Pacific as well as Russia, seem to be importing Greek wines of various styles and appellations.  This, I have to say, comes mostly as a result of the increased extroversion of Greek producers who are actively pursuing exports, offering top quality wines at very good prices.  However, a strategic plan is also underway, commissioned and executed by the official body that governs the Greek wine sector, aiming at the effective (re)positioning of Greek wines in major international markets.

I could go on — but I think you get the idea.  No one asked for the crisis to happen, and no one certainly ever hoped for it. But it looks like Greek wine may come out of it not only standing tall, but even in a better shape than before.

Am I an incurable optimist? Possibly.  Let time prove me wrong.  Or right.  But let us all make sure that we play our part in this effort, in the meantime…